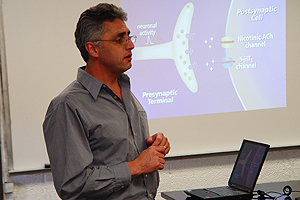 “Despite some of the contrary news you might be hearing, science is a great and rewarding career,” Yakel said. “I feel honored every day that I get to come to work and study how the brain works.” (Photo courtesy of SAU School of Sciences, Mathematics, Engineering) 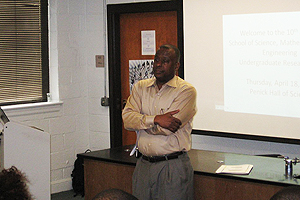 It wasn’t just a talk about cholinergic receptors in the brain that got the students at Saint Augustine’s University (SAU) excited about careers in science. It was more a message of hope and pursuing dreams that caught their attention.

“I was where you are now, studying for my bachelor’s degree in science, and feeling like I wasn’t smart enough or good enough to be a scientist,” said Jerry Yakel, Ph.D., head of the Ion Channel Physiology Group and Acting Chief of the Laboratory of Neurobiology at NIEHS. “Fortunately, I had fabulous mentors that kept encouraging me to pursue my love of science. And I’m so glad I listened to them.”

Yakel was invited to give the keynote address April 18 at SAU's 10th annual Undergraduate Research Day for the School of Sciences, Mathematics, and Engineering. Yakel spoke from experience, when he said students from underrepresented groups sometimes think graduate schools are too expensive and out of reach.

“The truth is, graduate schools across the country are looking for people like you — young, smart, inquisitive students willing to work hard,” he said.

During his visit to SAU’s downtown Raleigh, N.C., campus, Yakel was able to catch up with the organizer of the event, Mark Melton, Ph.D., associate professor of biology and dean of the School of Sciences, Mathematics, and Engineering. Melton is among a dedicated group of educators who spent their summers working with NIEHS scientists on research projects. He worked with Yakel’s group and the two have co-authored several articles together. Both share a passion for science and mentoring the next generation of scientists.

“No matter how busy Jerry is, he always makes time to share his science and his own career journey, so others can be inspired,” Melton said. “It means a lot to the students.”

During his talk, Yakel also mentioned why it was an exciting time to be a scientist, especially studying the brain.

“Just a few weeks ago, the President and the director of the National Institutes of Health stood together and announced a $100 million initiative that is going to revolutionize our understanding of the brain,” said Yakel.  The new Brain Research Through Advancing Innovative Neurotechnologies (BRAIN) Initiative  aims to help researchers find new ways to treat, cure, and even prevent brain disorders, such as Alzheimer’s disease, epilepsy, and traumatic brain injury.

Yakel received his B.S. from Oregon State University and his Ph.D. from the University of California, Los Angeles, where he studied ligand-gated ion channels and serotonin receptors. He is well known for his work on nicotine receptors in brain function, and his recent work in mice may have implications for learning and memory. His group demonstrated that, in the brain’s hippocampus, the timing of the release of the neurotransmitter acetylcholine may play a role in regulating nerve cell connections or synapses (see story).

Yakel, as well as other scientists and postdoctoral students, work closely with the NIEHS Office of Science Education and Diversity, to reach out to talented students from underrepresented groups to get them interested in environmental health sciences. Their work has paid off as three SAU students — Kacey McHoney, Jennifer Plair, and Malcolm Richbourg — are currently doing research through the NIEHS Scholars Connect Program (see story).