The role of calcium signaling in immune function 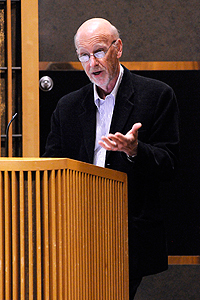 Cahalan began his talk with an overview of the human immune system, before describing his research on calcium signaling in T cells. (Photo courtesy of Steve McCaw) 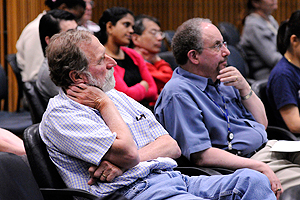 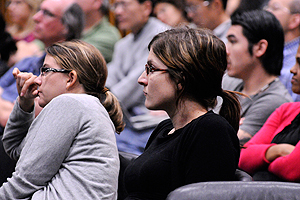 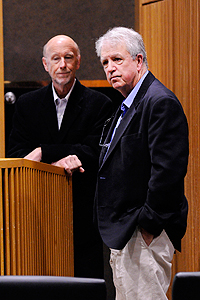 Cahalan and Putney listened attentively to questions from the audience. (Photo courtesy of Steve McCaw)

Early in his career, Michael Cahalan, Ph.D., wanted to combine immunology and biophysics, two seemingly unrelated fields of science, to create a unique research niche that was his own. Since then, his vision has led to the ability to observe living immune cells in their host environment.

Cahalan discussed his work April 9 as part of the 2013 NIEHS Distinguished Lecture Series. “Cracking CRAC — the calcium release-activated calcium channel of the immune system,” was hosted by James Putney, Ph.D., head of the Calcium Regulation Group in the NIEHS Laboratory of Signal Transduction.

Cahalan is a distinguished professor and chair of the Department of Physiology and Biophysics at the University of California, Irvine. In his introduction, Putney described Cahalan as an innovative researcher, whose quest has now turned into an enterprising venture that demonstrates the importance of the calcium signaling pathway in T cell function, and its potential as a therapeutic target for immune deficiency in humans.

“I would like to tell a story through some movies,” Cahalan said as he began his talk. He introduced the audience to the revolutionary two-photon microscopy technique, which provides a much higher photon density compared to conventional microscopy methods, and subsequently enables imaging with greater sensitivity and depth penetration. Cahalan and colleagues took advantage of this technology to produce three-dimensional movies of live immune cells in various host environments, from isolated mouse lymph nodes to mice.

Cahalan’s imaging experiments revealed how different types of immune cells move in the lymph nodes, their homing behavior, and their modes of action to eliminate foreign antigens.

“The T cells move incredibly fast, so that they can scan the environment for antigens that are captured and brought to the lymph nodes by dendritic cells,” Cahalan explained. “Once the two cell types meet, the dendritic cells interact with the T cells through long extensions, forming the immunological synapses.”

He said these interactions, in turn, activate the T cells, causing them to divide rapidly and execute their effector functions.

The discovery of various ion channels in T cells, many of which are calcium-regulated, sparked Cahalan’s interest in the significance of calcium signaling in T cell function. His group found that calcium signaling is required to enhance T cell proliferation and the stability of the immunological synapses. The group also measured a small, but significant, inward calcium current which restores the calcium source inside the cells.

Through systematic and genome-wide RNAi screening, using cultured insect cells, Cahalan and colleagues discovered two proteins — the stromal interacting molecule (STIM) and Orai — which constitute what they termed the Ca2+ release-activated Ca2+ (CRAC) channel. Homologues of these proteins are present in humans, and the channel is highly selective for calcium ions. More importantly, the CRAC channels are responsible for engaging T cells and dendritic cells in the immunological synapses upon antigen recognition.

Cahalan emphasized that the CRAC channels are tightly regulated. Single amino acid mutations in their protein sequences may alter their flexibility and ion selectivity, leading to dire consequences.

“Many of these mutations have been implicated in patients with severe, combined immune deficiency,” he added.

He also stressed that the stoichiometry, as well as the localization of STIM and Orai in the cells, is critical for the proper functioning of the channels, and has devoted substantial effort into dissecting how these aspects are regulated. Ultimately, Cahalan hopes to capitalize on his findings on CRAC channels, by developing therapeutic agents.

“This is a long and arduous process, but we are optimistic that these agents will make their way into clinical trials, and eventually benefit patients with immune deficiency disorders.”

(Sheila Yong, Ph.D., is a visiting fellow in the NIEHS Laboratory of Signal Transduction.)