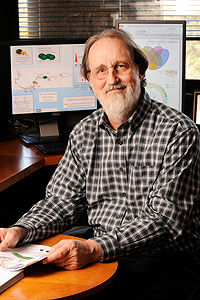 Lead researchers Bell and Bond are corresponding authors on the study. (Photo courtesy of Steve McCaw) 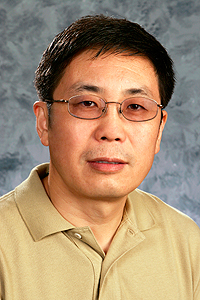 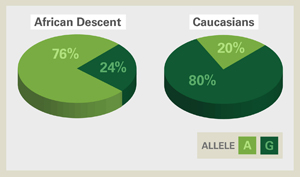 A gene important in skin tanning has been linked to higher risk for testicular cancer in white men, according to a study led by scientists from NIEHS and the University of Oxford in England. Nearly 80 percent of white men carry a variant form of this gene, which increased risk of testicular cancer up to threefold in the study.

The research appeared online Oct. 10 in the journal Cell, and is the result of an integrated analysis of big data supported by laboratory research. The team suspected that variations in a gene pathway controlled by the tumor suppressor gene p53 could have both positive and negative effects on human health.

“Gene variations occur naturally, and may become common in a population if they convey a health benefit,” said Douglas Bell, Ph.D., author on the paper and lead researcher in the NIEHS Environmental Genomics Group. “It appears that this particular variant could help protect light-skinned individuals from UV skin damage, like burning or cancer, by promoting the tanning process, but it permits testicular stem cells to grow in the presence of DNA damage, when they are supposed to stop growing.”

Bell explained that p53 stimulates skin tanning when ultraviolet light activates it in the skin. It then must bind a specific sequence of DNA located in a gene called the KIT ligand oncogene (KITLG), which stimulates melanocyte production, causing the skin to tan.

To conduct the analysis, NIEHS staff scientist Xuting Wang, Ph.D., co-author and lead bioinformatics scientist on the paper, led a data mining expedition to sieve through many different data sets. The team selected possible leads from the intersection of more than 20,000 p53 binding sites in the human genome, 10 million inherited genetic variations genotyped in the 1000 Genomes Project, and 62,000 genetic variations associated with human cancers identified in genome-wide association studies (GWAS). These data sets were gathered through joint efforts of thousands of researchers from around the world.

“In the end, one variant in the p53 pathway was strongly associated with testicular cancer, but also, surprisingly, displayed a positive benefit, which is probably related to tanning that has occurred as humans evolved,” Wang noted.

A significant marker of cancer risk, especially for Caucasian males

The group at the Ludwig Institute for Cancer Research at the University of Oxford, led by Gareth Bond, Ph.D., performed complex experiments to confirm the molecular mechanism that linked the variant with cancer and tanning.

“White males with a single nucleotide variation in KITLG, called the G allele, have the highest odds of having testicular cancer. In fact, the twofold to threefold increased risk is one of the highest and most significant among all cancer GWAS conducted within the past few years,” said Bond. “The high frequency of this allele in light skin individuals may explain why testicular cancer is so much more frequent in people of European descent than those of African descent.”

Bond said although the G allele increases testicular cancer risk, it might explain why testicular tumors are often easily cured with chemotherapy. “Most other tumors have a mutant p53, but in these testicular cell tumors, the p53 is functioning properly, and the drugs used for testicular cancer appear to work in concert with p53’s tumor suppression function to kill the cancer cells.”