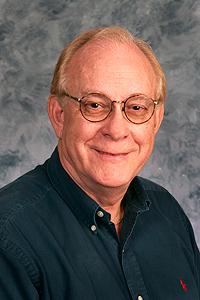 During his long association with EMGS, Bishop served as treasurer, executive board member, and past president of one of its regional groups. (Photo courtesy of Steve McCaw)

When former National Toxicology Program (NTP) geneticist Jack Bishop, Ph.D., retired in 2012, after 40 years of federal service, he had amassed an impressive record of scientific accomplishments, including more than 100 peer-reviewed journals articles, presentations at dozens of national and international conferences, and decades of experience in germ cell mutagenesis and environmental toxicology. Now, he has one more accolade to add to the list.

The Environmental Mutagenesis and Genomics Society (EMGS) named Bishop as its 2013 Alexander Hollaender Award winner. The EMGS is dedicated to promoting research that examines the causes and consequences of damage to the genome and epigenome. According to its website, the award is given each year in recognition of outstanding contributions in the application of the principles and techniques of environmental mutagenesis to the protection of human health.

“I am very humbled and honored to receive this award and to be included in such a prestigious list of Alexander Hollaender Award winners,” Bishop said upon hearing the news.

Bishop came to NTP in 1985 from the U.S. Food and Drug Administration National Center for Toxicological Research in Jefferson, Ark., where he spent 10 years investigating chemically-induced mutagenesis in rodent germ cells. Prior to that, he was a research geneticist at the U.S. Department of Agriculture Bee Breeding and Stock Center Laboratory in Baton Rouge, La.

While at the NTP, he served in the Toxicology Branch as project officer for research that evaluated the reproductive and developmental toxicity of chemicals, and conducted his own studies in reproductive, developmental, and genetic toxicity. Bishop was also instrumental in the effort to develop biomarker assays for detecting genetic damage in rodent sperm, using fluorescence in situ hybridization.

Two examples of his work represent ground-breaking research in the field of environmental mutagenesis. His 2003 report found that the chemical agent N-hydroxymethylacrylamide had detrimental effects in mouse germ cells, or the cells involved in reproduction, rather than somatic cells, which comprise all of the other cells in an organism. Bishop also determined that pregnant women who took azidothymidine, a medication used to treat patients with HIV-AIDS, gave birth to children who sustained some genetic damage, as a result of the drug’s ability to cross the placental barrier.

“Jack has been instrumental in helping the NTP have a prominent and forward thinking role in the field of environmental mutagenesis,” Bucher said. “NTP is fortunate to have had several NTP staff recognized by EMGS over the years.”