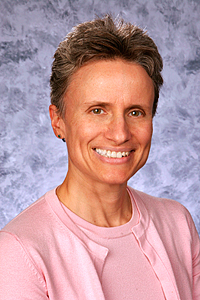 London said that this study was one of the most interesting projects she’s been involved with during her tenure at NIEHS. (Photo courtesy of Steve McCaw) 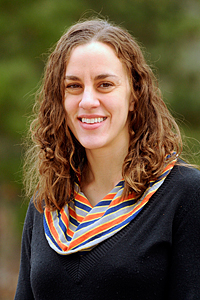 Joubert is a research fellow in the NIEHS Epidemiology Branch and one of 19 NIEHS trainees (see related story) who are 2013 NIH Fellows Award for Research Excellence winners. (Photo courtesy of Steve McCaw)

Previous research has determined that women who smoke during pregnancy tend to have babies who experience several adverse health effects, such as low birth weight, some childhood cancers, impaired lung function, and early respiratory illness. For years, scientists searched for the connection between exposure to tobacco smoke in utero and childhood disease. Now, a new study published by NIEHS scientists and their collaborators at Duke University, at the University of North Carolina at Chapel Hill, and in Norway may have found the answer.

The team determined that several genes specific to tobacco smoke detoxification and other development processes, in the children born to mothers who smoked during pregnancy, had different amounts of DNA methylation, which is the addition of methyl groups onto DNA, than children of nonsmokers. These specific genes controlled tobacco smoke detoxification and several other developmental processes.

Methylation is a biochemical process that is important for normal development. Scientists consider methylation to be a type of epigenetic control that influences whether, when, and how much a gene is expressed. The authors suggest that the differing amounts of methylation may provide one mechanism for the detrimental health effects seen in these children. The work appeared online July 31 in Environmental Health Perspectives, and is the largest study to examine the association between in utero exposure and methylation measured at birth.

Biomarker and new technology add power to the findings

The results came from participants in the Norwegian Mother and Child Cohort Study, an ongoing long-term prospective cohort study of 110,000 pregnant Norwegian mothers and their children. Rather than using self-reporting to find out which mothers smoked during pregnancy, the researchers used cotinine, a reliable smoking biomarker. After identifying smoking and non-smoking mothers, the research team examined cord blood from 1,062 infants born to these mothers.

According to Stephanie London, M.D., Dr. P.H., a lead researcher at NIEHS and corresponding author of the study, the team is the first to use a commercially available method called the Infinium HumanMethylation450 BeadChip (450K) to test the infants’ blood. The 450K is reliable, cheaper, and faster than previously used approaches, but still provides good coverage. Its use is what sets this study apart.

“The 450K allowed us to examine methylation across the genome in a much more comprehensive way and on large numbers of subjects than was possible in the past,” London said.

The research team analyzed samples from a birth cohort study in the U.S. and observed the same findings, which provides important confirmation.

“Another unique aspect of this study is the replication of our results in an independent sample from the U.S.,” said first author Bonnie Joubert, Ph.D. “Although this sample was smaller, with 18 babies born to smoking mothers and 18 born to nonsmokers, the relationship between newborn methylation and maternal smoking was consistent.”

The work offers new insight into understanding the underlying cause of adverse health effects in the children of mothers who smoke during pregnancy.