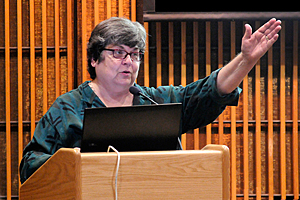 Hricko told her audience that community involvement has helped shift the policy debate about traffic pollution and transportation projects to make the goods movement industry accountable, by taking into consideration the health and environmental impacts from the multiple sources of air pollution. (Photo courtesy of Steve McCaw) 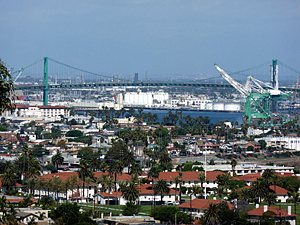 The ports are big and getting bigger, estimated to double within the next five years. People in the area live, work, learn, and play exposed to high levels of traffic emissions from nearby roads, rails, and docks. (Photo courtesy of John Schelp) 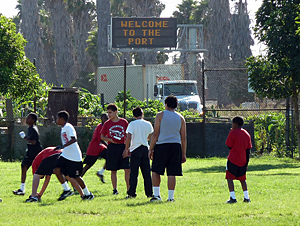 The ports’ transportation corridors stretch from Long Beach to East Los Angeles, where pollution from trucks, ships, trains, and other diesel-powered sources poses health concerns for residents and students in homes and schools adjacent to the docks and highways. (Photo courtesy of John Schelp)

Community outreach and engagement veteran Andrea Hricko, of the University of Southern California (USC), delivered a presentation May 24 at NIEHS, focusing on effective collaboration between researchers and community members.

“The community is concerned about environmental health risks related to international trade through the ports of Los Angeles and Long Beach,” Hricko explained. “These are the largest ports in America and are often described as the economic engine of Southern California, with 40 percent of the entire nation's goods transported through their facilities.”

In her talk, titled “Responding to Community Concerns on Environmental Public Health: Advancing the Scientific Research, Translation, and Policy Agenda,” Hricko detailed the progress that has resulted from the effective engagement of researchers with community members, but stressed that much work remains to be done. Liam O’Fallon, program analyst in the NIEHS Division of Extramural Research and Training (DERT) at NIEHS, hosted the presentation, which was part of the DERT Keystone Science Lecture Seminar Series.

Hricko is a professor at the Keck School of Medicine at USC and heads the Community Outreach and Engagement Core (COEC) at the NIEHS-supported Southern California Environmental Health Sciences Center, directed by Frank Gilliland, M.D., Ph.D. The goals of the COEC are to insert health into the transportation agenda, by sharing Center research findings, strengthening the capacity of the public to understand environmental health, and fostering a network of concerned residents and stakeholders focused on air pollution in the harbor area (see text box).

Community-engaged research has led to several notable successes, such as the inclusion of research findings into environmental impact studies prepared for port, rail yard, and freeway expansion projects; changes in the idling rules for trucks going in and out of the port; and education of California lawmakers on the health benefits of prohibiting new schools from being situated within 500 feet of a major transportation corridor, which resulted in a state law. However, given the projected growth of the ports, much work remains to be done. For example, new schools cannot be situated close to a major highway, yet there is no restriction on new or expanded highways or rail yards being built next to existing schools.

Hricko noted that some of the advantages of community-academic partnerships include increased understanding of, and connection to, the science by community members; a better awareness of the social justice implications by academics in their research; and more effective advocacy campaigns by community groups that had developed the necessary skills to explain the scientific basis of their concerns to policymakers. Hricko concluded her talk by observing that the successful model of community-academic partnership and outreach that she helped develop at USC is just one of many efforts that are part of the NIEHS Partnerships in Environmental Public Health network that have been well positioned to address other environmental health concerns, such as the Gulf oil spill and hydraulic fracturing.

(Brant Hamel, Ph.D., is a postdoctoral fellow in the NIEHS Molecular Endocrinology Group.) 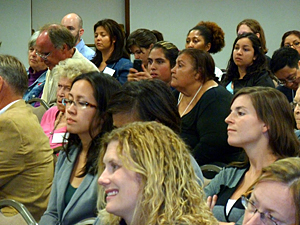 USC held community forums in 2001, 2005, and, most recently, in October 2011, drawing capacity crowds of residents, many of them concerned parents. (Photo courtesy of John Schelp) 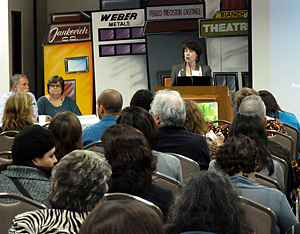 During opening remarks at the 2011 forum, NIEHS/NTP Director Linda Birnbaum, Ph.D., at podium, was joined by panelists, including USC representatives Gilliland, front left, and Hricko. (Photo courtesy of John Schelp)

Hricko detailed how the Center is a national leader in research on the health effects of air pollution, and she said that its outreach program’s focus on goods movement, or transport of containers with products inside them, grew out of community concerns raised at a 2001 USC-NIEHS town hall meeting in Los Angeles. At the meeting, residents spoke about the rapid growth at the ports, and the concomitant pollution from the trucks and locomotives transporting goods arriving from Asia. As one example of the impact of increased levels of transportation, Hricko described a school near a rail yard where 500 trucks per hour pass by and where 28 percent of the students already have asthma. She noted that the rail yard is proposed for expansion, despite the opposition of local residents.

Hricko explained that one approach used by the Center, to ensure that community members are actively involved in air pollution research, is the creation of neighborhood assessment teams, or A-Teams. These are teams of USC-trained community members who track data, such as the number of big rig trucks passing a school in a given time period and the concentration of ultrafine particles measured using real-time monitoring devices. A-Team members are often parents of children affected by asthma and are chosen based on their community leadership capabilities. Talented A-Team members have gone on to serve as permanent staff members on projects.