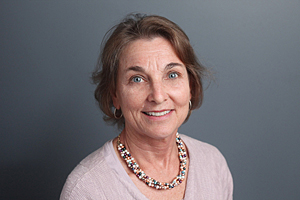 Rauh is deputy director of the CCCEH, which receives grant funding from the NIEHS and EPA. (Photo courtesy of Columbia University)

A new NIEHS-funded study reports that when a pregnant woman is exposed to chlorpyrifos, a commonly used pesticide, her child’s developing brain may be damaged, leading to lowered intelligence.

“The prenatal period is a vulnerable time for the developing child, and that toxic exposure during this critical period can have far-reaching effects on brain development and behavioral functioning,” said NIEHS grantee Virginia Rauh, Sc.D., a professor at the Columbia University Mailman School of Public Health. “We have demonstrated that there is a relatively monotonic dose-response effect, suggesting that some small effects occur at even very low exposures.”

This study is the first of its kind to use magnetic resonance imaging (MRI). Digital images produced from MRI scans are quite detailed and can detect small changes within the brain.

In the scans, structural changes — abnormal areas of enlargement and indentation across the surface of the brain — appeared among the children whose mothers had been exposed to higher levels of the pesticide. In three of four brain regions, higher chlorpyrifos exposure was consistent with lower full-scale intelligence quotient (IQ) measures in the exposed children.

The brain abnormalities appeared to occur at exposure levels below the current U.S. Environmental Protection Agency threshold for toxicity, according to the researchers.

To conduct the study, certain brain surface features of 40 urban children were examined. The sample size, although modest, nevertheless permits generalization of findings to a larger urban population, because it was a representative community-based sample.

“The group does not have exposure to polycyclic aromatic hydrocarbons [PAHs] or second hand smoke, two other exposures that might also have adverse effects on brain development and neurocognitive outcomes,” explained Rauh. “So, the small sample size, common in MRI studies, is balanced by a relatively pure or unconfounded design.”

Although residential application of chlorpyrifos was banned in 2001, the insecticide is still approved for other uses. Chlorpyrifos continues to be present in the environment through its extensive use in wood treatments and public spaces, such as golf courses, parks, and highway medians. People near these sources can be exposed by inhaling the chemical, which drifts on the wind. Additionally, chlorpyrifos is approved for food agriculture, and exposure can also occur by eating fruits and vegetables that have been sprayed.

“Even if dietary doses from residue on food are low, and we think they are for any one food, what happens if a person is eating five different foods on a daily basis, each with a small amount of chlorpyrifos residue?” posited Rauh. “This is something to think about.”

“It will be important to continue to follow this cohort of children, to see if the problems resolve or whether they are irreversible, which is an outcome suggested by animal research literature,” said Rauh. “It might be possible to design an intervention to address the moderate cognitive deficits.”

“If the animal studies suggest there may be a problem, and we follow up with human work that is confirmatory, then we would be wise to limit the use of such chemicals when the evidence starts to build up,” added Rauh. “There are plenty of examples of widespread or commonly used exposures, for example, lead and tobacco, where we waited too long to try to reduce exposure, with the unfortunate result of great harm to large numbers of individuals, which might have been preventable had we paid attention to the mounting evidence.”

This research was supported by NIEHS grants for The Columbia Center for Children’s Environmental Health, Prenatal PAH Exposure, Epigenetic Changes, and Asthma, and Health Effects of Early-Life Exposure to Urban Pollutants in Minority Children.

(Carol Kelly is a research and communication specialist with MDB, Inc., a contractor for the NIEHS Division of Extramural Research and Training.)

Previous work conducted at the Columbia Center for Children’s Environmental Health (CCCEH) demonstrated exposure to pesticides during pregnancy harms the healthy growth and development of babies in the womb, as well as adversely affecting development in early childhood. Their studies are the first to follow exposed mothers and their offspring over time while documenting changes in the children's cognitive development.

A 2006 CCCEH study showed that children who were prenatally exposed to chlorpyrifos had significantly worse cognitive and motor development at age 3. Early delays affect children’s ability to learn and their later school performance. These children were also significantly more likely to score in the clinical range for behavioral and attention problems such as attention deficit hyperactivity disorder, a condition associated with altered brain functioning and characterized by an inability to focus on tasks.

"These findings indicate that prenatal exposure to the insecticide chlorpyrifos not only increases the likelihood of developmental delay, but may have long-term consequences for social adjustment and academic achievement," said Rauh, in a Columbia press release about the 2006 study.

In a 2011 CCCEH study involving urban minority mothers, children born to women who had the highest levels of chlorpyrifos in their cord blood during delivery scored three points lower on IQ tests at age 7, compared with children born to mothers with the lowest levels of the pesticide. The relationship persisted even after accounting for other factors that could explain differences in IQ, such as maternal education, the home environment, and possible underlying attention or development disorders.