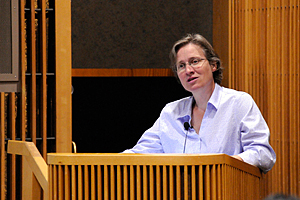 Green was elected to the National Academy of Sciences in May and is a professor in the molecular biology and genetics department at Johns Hopkins University School of Medicine, as well as a researcher at the Howard Hughes Medical Institute. She said she plans to use ribosomal profiling to better define what Dom34 and Hbs1 are doing in the cell. (Photo courtesy of Steve McCaw) 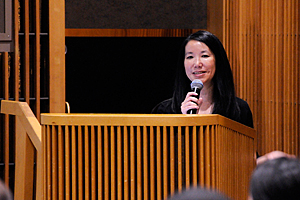 According to Hall, Green’s work could lead to new breakthroughs in drug design. She said, “Ribosomes are the targets of many antimicrobial agents, so her mechanistic work has obvious clinical implications.” (Photo courtesy of Steve McCaw)

Translation, or how living systems assemble proteins, is a complex mechanism that takes place on a cellular structure called the ribosome. For researcher Rachel Green, Ph.D., understanding its intricacies provides the ultimate in scientific investigation. She presented her work during her NIEHS Distinguished Lecture June 12.

Green studies two specific aspects of translation, namely how the ribosome chooses which transfer ribonucleic acids (tRNAs) to add to the messenger RNA (mRNA) template and how newly-formed proteins are released.

Having always been fascinated by questions about the origin of life, Green said examining how RNA stitches amino acids together allows her to see how translation began.

“If we open up the ribosome and take a look inside, all you see is RNA, which gives us confidence that the process must have evolved early on in an RNA world,” Green said. “Proteins came late in evolution as a supplement to make what we know as translation better, faster, and stronger.”

Green gave a brief review of translation, which is the walk of tRNAs along an mRNA. It occurs when a peptidyl-tRNA, or a tRNA that has a string of amino acids attached to it, is positioned over three nucleotides, or codons, on the mRNA. During this initial step of protein synthesis, the peptidyl-tRNA is positioned in the P site of the ribosome. With every round of amino acid addition, the ribosome needs to select a tRNA from solution that corresponds to the codon presented in the neighboring aminoacyl or A site. E. coli and most organisms have approximately 40 tRNAs that correspond to 61 codons that code for a particular amino acid. The final three codons, UAA, UAG, and UGA, are stop codons but, instead of being decoded by tRNA, they are recognized by proteins called release factors (RFs).

In bacteria, RF1 and RF2 bind with an energy-producing GTPase molecule called RF3 to terminate translation. In higher organisms, eukaryotic release factor 1 (eRF1) and its GTPase eRF3 do the job. Green stressed that although these proteins have the same names and functions, they are quite different proteins that evolved independently.

Preliminary work led Green to think that termination events were closely related to the monitoring of RNA quality, also known as mRNA surveillance. If the RNA has errors in it, the cell wants to get rid of those aberrant messages, because they are toxic. Research by other groups found that two proteins trigger the degradation of a bad message, Dom34 and Hbs1. Surprisingly, Dom34 is an eRF1 homolog and Hbs1 is an eRF3 homolog.

“Since it had just been shown, genetically, that Dom34 and Hbs1 are important for targeted mRNA decay in cells, we wanted to see what they would do if they encountered a ribosome,” Green added.

One of Green’s graduate students reconstituted translation in vitro, by using purified yeast ribosomal subunits, mRNAs, tRNAs, and minimal initiation, elongation, and termination factors. After doing kinetic analyses, he ran the products on a native gel and found that Dom34 and Hbs1 trigger the release of peptidyl-tRNA.

Further work determined that Dom34 and Hbs1 are termination-like factors that don’t catalyze termination, but are involved in recycling. Recycling is a vital step in translation that results in the dissociation of ribosomal subunits after a full-length protein is released. This dissociation allows for normal initiation and subsequent rounds of translation. Scientists knew that bacteria used ribosome recycling factor for this action, but since eukaryotes lacked an apparent homolog, it wasn’t clear how this process took place in higher organisms. Green’s investigations shed new light on the topic. 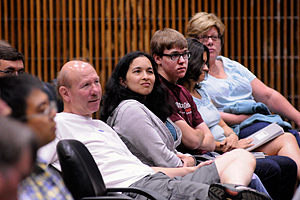 Green’s seminar brought scientists from a variety of disciplines together. From left to right, are William Beard, Ph.D., and Nisha Cavanaugh, Ph.D., from the Laboratory of Structural Biology, and summer student Forrest Ashworth,, Jacqueline de Marchena, Ph.D., and Patricia Jensen, Ph.D., from the Laboratory of Neurobiology. (Photo courtesy of Steve McCaw) 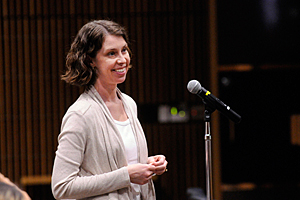