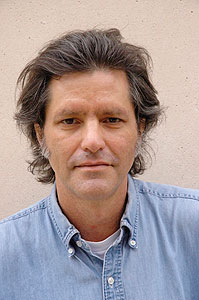 Wing opened his talk with a comment about his audience. “I think science writers are really important, because lack of understanding of science in the general public is a huge problem,” he told the audience. “I do not believe we can have a sustainable democracy, unless people understand more about science.” (Photo courtesy of UNC-CH) 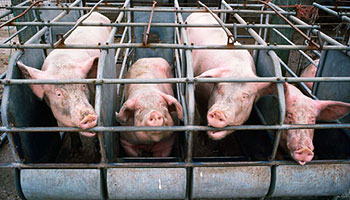 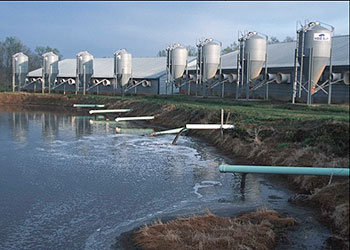 Permitted by the North Carolina Department of Environment and Natural Resources, a large factory farm may produce more waste than a small town. Urine and feces are piped to lagoons before being sprayed on adjacent fields. (Photo courtesy of Steve Wing) 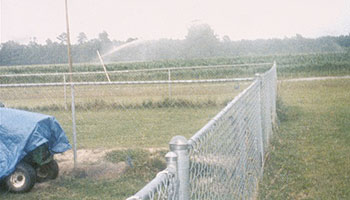 As this photo from a neighboring resident shows, hog spraying doesn’t always respect property lines. This family covers its lawn tractor when the factory sprays its fields, and some residents report that the smell of hog waste seeps indoors, even with windows and doors shut. (Photo courtesy of Steve Wing)

At the very hour the embargo on his latest paper lifted Oct. 28, NIEHS grantee Steve Wing, Ph.D., addressed a capacity audience gathered in Raleigh, N.C., for the annual meeting of the National Association of Science Writers (see story).

Wing’s presentation examined the environmental injustices and adverse health effects posed by concentrated or confined animal feeding operation (CAFO) practices in economically disadvantaged rural areas of eastern North Carolina. Low income communities of color, he explained, have ten times more CAFOs than wealthier, white communities, even after adjusting for how rural they are.

Wing is an associate professor at the University of North Carolina at Chapel Hill (UNC) and advocate for social justice who was honored in 2009 with the International Society for Environmental Epidemiology Research Integrity Award (see story). Literacy is an important part of Wing’s quest for environmental justice. His research combines community engagement with novel and sophisticated epidemiology, to empower people in their efforts to improve public health for themselves and their neighbors.

According to Wing, public health is not just the inoculation and individual hygienic practices that preoccupy most public health offices. Instead, it should deal with such global issues as energy, transportation, water, waste disposal, housing, and agriculture, to support public policy for promoting well -being, in addition to combating disease.

CAFO practices, he said, are the outgrowth of a radical transformation in agriculture, as family farming gave way to corporate industrial production in the last half of the 20th century. Unlike earlier ways of producing meat from hogs, cattle, and poultry, today’s industrial farming centralizes production in CAFOs, where animals are fattened for slaughter, as quickly and economically as possible, with imported factory-farm grain laced with hormones and antibiotics delivered to animals by automated feeders.

“The factory farms are profitable,” Wing argued, “because they don’t pay for the damage they do.”

Nutrients become toxic waste and a threat to health

Animals in CAFO operations live within a closed system, Wing explained. Feeding takes place in the same cage where animals defecate and urinate through slats in the floor. Typically, waste is then piped to lagoons, where it mixes with water that is then sprayed on open fields adjacent to the places community members live and breathe, play and work, eat and drink.

In such close confinement next to animal waste, disease is a constant threat. Wing touched briefly on the issues of animal welfare and biosecurity — the development of antibiotic-resistant bacteria that thrive in such facilities and the hazards posed by the carcasses of animals killed by disease — before moving on to the effects of poor air quality on the health of residents.

Beginning in 2008 with one of his first papers on the community health effects of industrial hog operations in eastern North Carolina, Wing, along with community advocates and fellow epidemiologists as co-authors, published a series of publications. These papers explored people’s perception of the impact of odor from these industries on daily living activities, as they relate to the beneficial use of property and enjoyment of life. They also addressed the associations between air pollution measures, including particulate matter and the toxic gas hydrogen sulfide (H2S), and health outcomes. Their findings provided evidence that hog pollution plumes from CAFOs limited several leisure time activities, impacted social interactions, and coincided with adverse mental and physical health outcomes.

The UNC team’s most recent paper used a repeated measures design to evaluate within-person effects of exposure to CAFO emissions, most tellingly in regard to diastolic blood pressure (see text box). It also measured air pollution levels in central locations with mobile instrumentation. Even though the study group was small, its comparison of people’s blood pressures during exposed and unexposed time periods helped eliminate bias from confounding factors. Exposures were assessed by a self-reported measure of the hog odor, together with instrument measures of H2S and particulates.

The same communities, shown in brown on this U.S. Census Bureau map, are places where the population is predominately made up of people of color. (Photo courtesy of Steve Wing)

Striving to overcome the limitations of self report

In his latest paper on the health effects of industrial hog production, Wing and colleagues followed up their findings, from a 2011 study on symptomatic and functional respiratory responses to specific, well-recognized environmental exposures arising from the industrial production of swine, with a study of blood pressure and stress. The team studied the same cohort of 101 non-smoking adult volunteers living near industrial swine operations in 16 neighborhoods in eastern North Carolina, residents who had been recruited through the engagement of community leaders.

Following two daily exposures to swine CAFO emissions, participants reported levels of hog odor on a 9-point scale and measured their blood pressure using an oscillometric, automated device. Simultaneously, the team measured ambient levels of H2S and particulate matter equal to or smaller than 10 micrometers in aerodynamic diameter, at central locations in each neighborhood. The researchers then compared each participant’s blood pressure during times of both more and less exposure to swine CAFO air pollution, with each participant serving as her or his own control for acute response.

Because swine CAFOs are the primary source of H2S in the study communities, the authors considered it a specific marker of hog malodor.

The team found that, on average, blood pressure of swine CAFO neighbors increased in association with increases in markers of transient plumes of odorant air pollution on the 9-scale rating and with concentrations of H2S greater than 10 parts per billion.

“Repeated acute physical environmental stressors, such as malodor and noise, may be aspects of the built environment that contribute to racial and economic disparities in high blood pressure and its sequelae,” they concluded. Wing pointed out, that even small increases in blood pressure could be important in the so-called stroke belt that includes communities in the study.

“I couldn’t have done this study without the support of community members,” Wing said of the need for building trust among participants. Because of CAFO operator sensitivity to the ongoing study and possible evasive efforts on their part, Wing thinks the results may actually underrepresent the health effects of exposure to CAFO air pollution.