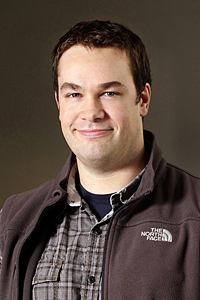 Schellenberg gave a brief synopsis of the research, saying, “We are learning, at atomic resolution, how these protein-adducted DNA breaks are repaired when topoisomerases go awry.” (Photo courtesy of Steve McCaw)

Using X-ray crystallography and biochemical analyses, Williams and his team determined how Tdp2 dictates a repair pathway that is critical for cells dealing with bulky topo II-DNA adducts, which are structures that develop when topo II forms a chemical bond with DNA. They published their results online Oct. 28 in the journal Nature Structural and Molecular Biology. In the paper, they described how Tdp2 acts as one of the agents responsible for chemotherapy drug resistance.

Williams said that topoisomerases play pivotal roles in life by enabling DNA replication and transcription. Topo II binds to DNA and untangles it by catalyzing a biochemical reaction. While critical for life, topoisomerases are also sensitive to environmental stressors and constitute an Achilles’ heel for cancer cells.

Environmental toxicants, compounds in the diet, and existing DNA damage, present in the cell, can influence the topo II reaction, causing topo II to stop its biochemical reaction prematurely and become chemically bonded to DNA. As a result, topo II can block the replication and transcription machinery from doing their jobs. When a cell can’t copy its DNA, it can’t divide and eventually dies. Williams said the ability to arrest topo II on DNA is also how some of the most successful cancer therapeutic strategies work, by promoting genome instability and cell death in cancer cells.

The other partner in this cellular dance is Tdp2. Its job is to remove topo II–DNA adducts, by recognizing topo II-DNA conjugates and reversing the linkage between the two. Tdp2 is a key player in a major pathway in human cells for this action. By examining the protein at the atomic level, Williams’ group was able to trap Tdp2 in a number of conformations bound to DNA and a mimic of the topo II-DNA lesion. These X-ray crystallography studies mapped out a molecular mechanism for the removal of topo II.

“Using this information, we may be able to interfere with how Tdp2 repairs these topo II-DNA cross-links, to prevent cancer cells from overriding and combating the action of chemotherapeutic agents,” Williams said.

Matthew Schellenberg, Ph.D., a visiting fellow in the Williams’ group and lead author on the paper, said that the work may also lead to advances in preventing the replication of picornaviruses, including the virus responsible for the common cold. During the picornavirus life cycle, analogous protein-nucleic acid cross-links occur, except they form with RNA rather than DNA. Recent research from other groups suggests that Tdp2 reverses these protein-RNA conjugates as well. This RNA processing function suggests TDP2 also plays an important role in the life cycle of these viruses.

“Our Tdp2 studies will also contribute to the understanding of viruses that hijack the host cell’s DNA repair machinery as part of their normal life cycle,” Schellenberg said.