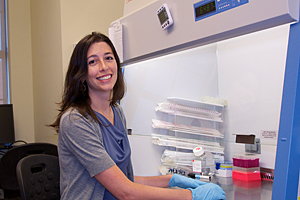 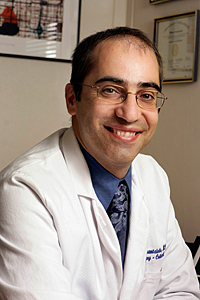 Garantziotis said of Heise’s work at NIEHS, "She was able to build on skills she had developed as a Ph.D. student, while applying them in a different model. This [skill set] enabled her to have a running start, but also allowed her to claim novelty in her approach." (Photo courtesy of Steve McCaw)

In collaboration with two of her colleagues at Virginia Commonwealth University (VCU), Heise will use more than $1 million in funding from the National Institute on Aging (NIA) to develop a multiscale hybrid mathematical model to help prevent ventilator-induced lung injury (VILI) — a line of research she had pursued in the lab of her NIEHS mentor, Stavros Garantziotis, M.D., Matrix Biology Group leader and Clinical Research Unit medical director.

“We want to try to understand how the cells in the lungs respond to the mechanical forces of breathing," said Heise in a VCU press release about the award. "The purpose of the grant is to put different parameters of the math model together to help clinicians tailor ventilator settings for individual patients, to help prevent lung injuries that occur due to the ventilator.”

Heise, who left NIEHS in 2010 for a post at VCU, has a track record of beating the odds. She completed her Ph.D. in bioengineering in five years, she secured her position at VCU after just two years of postdoctoral fellowship training and, now, still in her early thirties, she’s been awarded her first NIH research project grant, something most junior scientists usually don’t achieve before they reach forty.

Heise holds dual undergraduate degrees in biomedical and chemical engineering from Carnegie Mellon University, and earned her Ph.D. in bioengineering from the University of Pittsburgh. Conducting basic research in molecular biology with Garantziotis’ group helped her launch a line of research that promises positive therapeutic benefit for people at risk of experiencing complications from respiratory support.

In a 2010 Environmental Factor article by former NIEHS trainee Sophie Bullock, Ph.D., Heise explained that she had worked to understand the mechanisms by which lung cells sense and respond to mechanical strain. She feels this is an important area of research, because mechanical ventilation can cause or worsen lung injury, although respirator support can be crucial for a patient's survival. In some cases, VILI can even lead to respiratory failure and death.

Incidences of respiratory failure impacts approximately one in 3,000 U.S. residents, with mortality rates of approximately 40 percent. The majority of patients receiving mechanical ventilation are elderly patients whose respiratory systems fail to function due to various lung and airway diseases, such as acute respiratory distress syndrome and asthma — an important reason for Heise’s choice of an aged mouse model for her experiments.

“Most people study young healthy animals and that’s not very realistic, as most patients on ventilators are elderly," she said. "That’s why we’re looking at aged mice. We’re looking at the response in the cells, the lung mechanics, and the inflammatory process in the whole animal.”

Capitalizing on the NIEHS training experience

During her time at NIEHS, Heise took full advantage of her lab experience with Garantziotis, as well as the many resources available from the NIEHS Office of Fellows’ Career Development (OFCD) and NIEHS Trainees Assembly (NTA), including OFCD-sponsored career development workshops and the NTA-organized Biomedical Career Fair held each spring.

Working in a small lab allowed her to form close working relationships with her colleagues and benefit from focused mentoring by Garantziotis. In a message to him about her new grant, Heise thanked Garantziotis for his mentoring. “I certainly couldn't have written this grant without everything I learned from you,” she wrote.