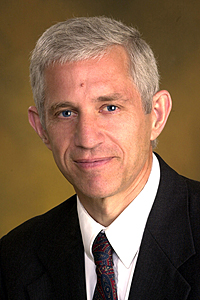 During his keynote speech, Kunkel briefly summarized the variety of subjects covered in the five-day meeting. “In regard to DNA replication, there are a lot of ways to do things wrong.” (Photo courtesy of Steve McCaw) 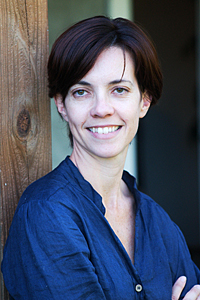 Santos is an assistant professor at the University of Medicine and Dentistry of New Jersey (UMDNJ) and is currently working as a guest researcher in the Laboratory of Toxicology and Pharmacology at NIEHS. (Photo courtesy of UMDNJ) 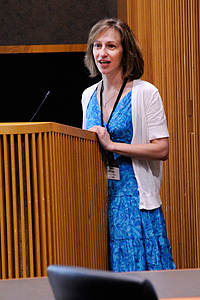 With a special interest in de Lange’s keynote address, Opresko is intrigued with how DNA damage is repaired at telomeres. (Photo courtesy of Steve McCaw)

NIEHS scientists and grantees convened with internationally renowned scientists in Newport, R.I., for the 2012 Mutagenesis Gordon Research Conference (GRC). Leading the way, Laboratory of Structural Biology head Thomas Kunkel, Ph.D., delivered the keynote address about his research on the biological processes that are affected by incorporating ribonucleotides into DNA.

Processes that promote inaccurate DNA replication and mutations affect human health and survival. Genome integrity results from a delicate balance between the potential toxicity of DNA damaging agents and cellular processes that repair the damage and restore replication.

Many presentations discussed how DNA repair pathways are overwhelmed in aging, various cancers, and genetic disease, which is of interest to former NIEHS postdoctoral research fellow Janine Santos, Ph.D. “I’m particularly fascinated with how DNA repair proteins safeguard genome integrity, both in the nucleus and mitochondria,” Santos explained. “There is quite a wide range of disease symptoms associated with failure of DNA repair systems.”

The five-day, biennial conference continues a long-standing tradition in the field of DNA replication and repair. Attending his 16th Mutagenesis GRC, Kunkel argues that new discoveries in DNA damage tolerance and repair maintain the persistent interest in mutagenesis.

“The studies of mutagenesis continue to thrive, because mutations are fundamental to so many aspects of biology, with profound implications on topics from evolution to human health,” Kunkel noted.

Kunkel’s keynote talk showcased an important new line of investigation in mutagenesis — uncovering unexpected consequences for incorporating ribonucleotides into DNA. Kunkel’s research shows that ribonucleotides, while normally considered as the building blocks of RNA, exist in DNA much more prevalently than any other DNA damage or abnormal nucleotide. Kunkel believes that this observation is biologically important, and the field agrees.

The intersection of DNA and RNA was evident in research connected to NIEHS. Former NIEHS postdoc and current assistant professor at the Georgia Institute of Technology, Francesca Storici, Ph.D., discussed repair pathways that are mediated by RNA. Current NIEHS grantee, Paul Doetsch, Ph.D., of the Emory University School of Medicine, described his research on how transcription can succumb to many of the same problems as DNA replication, in regard to damage and mistakes.

While the conference highlighted the newest insights on DNA damage responses, various talks emphasized the variety of types of DNA in the cell. The second keynote lecture, by Rockefeller University professor Titia de Lange, Ph.D., addressed how telomeres, the noncoding ends of chromosomes, maintain overall genome stability. The contrast in Kunkel’s and de Lange’s research underscored the conference’s emphasis on including work beyond classical mutagenesis research. Patricia Opresko, Ph.D., assistant professor at the University of Pittsburgh and an NIEHS Outstanding New Environmental Scientist (ONES) grant awardee, appreciated the multifaceted approach.

“These talks beautifully demonstrated how important advances are made by maintaining cutting-edge research in more familiar topics, like DNA polymerase fidelity,” Opresko mentioned, “but also by extending mutagenesis research to related fields of telomere biology.”

Several talks, based on research funded by NIEHS, reflected the diversity in the role of mutagenesis in human health. For instance, ONES awardee Sarah Delaney, Ph.D., discussed DNA damage in expansion of triplet repeats that are prevalent in diseases such as Huntington’s disease. Fellow grantee Myron Goodman, Ph.D., presented one of several talks on specific kinds of mutagenesis that are necessary for antibody production.

Emerging technologies, such as deep sequencing, have promoted some of the depth and variety of research in DNA mutagenesis. The trend of exciting new discoveries in mutagenesis and their links to human health motivated several in the field to mark the 2014 Mutagenesis GRC on their calendars.

“With the advent of so many powerful new technologies that truly amaze me, I’ve never been more optimistic for the future of this field than I am right now,” Kunkel remarked. 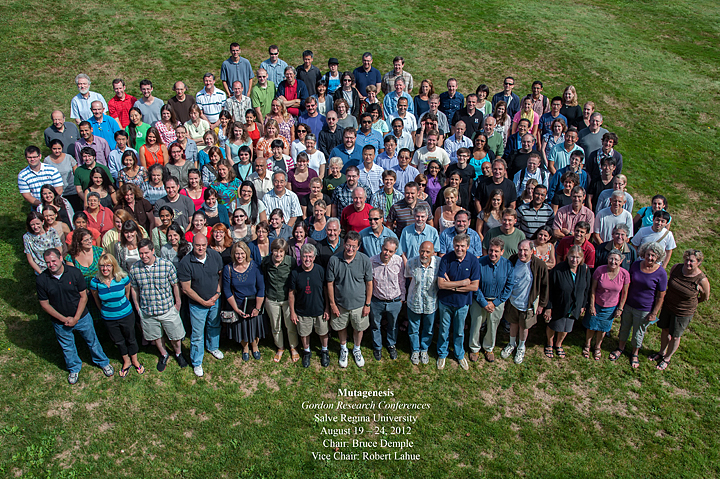