Distinguished lecturer discusses the mechanism of action of amphetamine 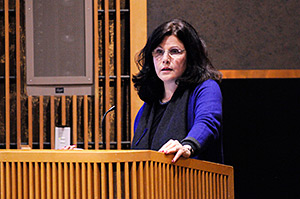 “The key is to understand the functioning of the transporters of neurotransmitters in the brain, so that they can be targeted by new drugs to treat psychiatric disorders,” Amara said. (Photo courtesy of Steve McCaw) 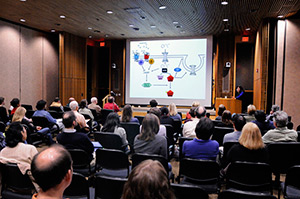 Amara engaged the audience with intriguing information about the action of amphetamine on a cellular level and the pathways involved. (Photo courtesy of Steve McCaw)

Neuroscientist Susan Amara, Ph.D., delivered the latest talk in the NIEHS Distinguished Lecture Series Dec. 13, 2011, with a presentation focused on the mechanism of action of amphetamine on dopamine and glutamate transporters. These transporters are responsible for the clearance of the neurotransmitters dopamine and glutamate following their release at sites of neuronal communication in the nervous system known as synapses.

Amara specializes in the structure and function of brain neurotransmitter transporter proteins and is the Thomas Detre professor and chair of neurobiology at the University of Pittsburgh. She is also the most recent past president of the Society for Neuroscience, the largest organization of neuroscientists in the world. NIEHS lead researcher Jerrel Yakel, Ph.D., hosted the talk.

Her current research is focused on elucidating the biochemical pathways that mediate dopamine transporter internalization by amphetamine. Understanding this mechanism is important because the dopamine transporter serves as a target for a variety of clinically used medications and recreationally abused drugs.

The actions of amphetamine

“While reuptake inhibitors of serotonin, norepinephrine, and dopamine are widely used clinically to treat depression,” Amara said, “we know much less about the mechanism of action of amphetamines, which also target the three biogenic amine transport systems.” In her talk, Amara stressed that cocaine and amphetamines, both commonly abused psychostimulants, have different actions on the dopamine transporter.

After her lecture, Amara joined NIEHS postdoctoral fellows for a brown bag lunch. It was an opportunity for these young scientists to tell Amara about their own research interests and seek her advice regarding their careers. Amara briefly spoke about her research and career progression, and about the prospects of research funding for biomedical science in the current budgetary environment. She also mentioned her lobbying effort with Congress during her tenure as the president of the Society for Neuroscience, in favor of keeping research funding at current levels. 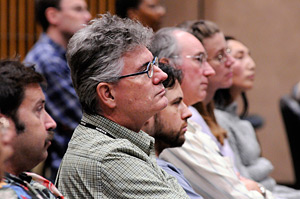 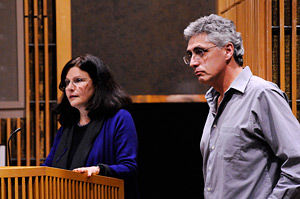 Amara and Yakel listened to questions raised by audience members after the talk. (Photo courtesy of Steve McCaw)