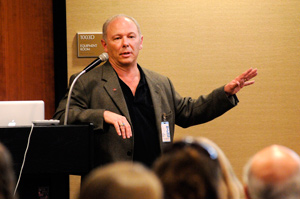 Skinner is a pioneer in the field of epigenetic transgenerational inheritance, and for that reason he has met his share of resistance. “The notion that your genes, the environment, and your epigenetic programming, all play a role in your health, as well as your children's and grandchildren's, is a difficult concept for many people to handle,” said Skinner. (Photo courtesy of Steve McCaw) 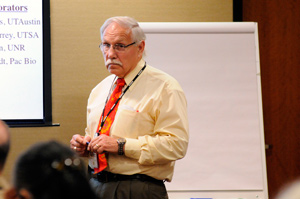 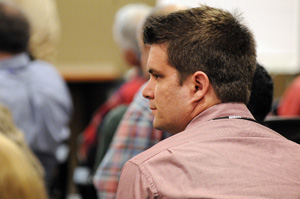 NTP Toxicologist, Chad Blystone, PhD., listens in on Skinner's seminar. The talk drew a capacity audience from across the Institute's labs and branches. (Photo courtesy of Steve McCaw)

A failed laboratory experiment led to an accidental discovery that is helping to change the way we understand genetics. It happened in the lab of NIEHS grantee (https://tools.niehs.nih.gov/portfolio/index.cfm?action=portfolio.grantdetail&grant_number=R01ES012974) Michael Skinner, Ph.D., at Washington State University. Skinner was studying genetic mutations, when he found, by chance, that, under the right conditions, environmental factors can change the way our genes work for generations far into the future, without damaging DNA. Skinner, who is a professor of biological sciences, spoke May 10 on his discovery and how it has shifted the field of genetics, as part of the Keystone Science Lecture Seminar Series.

Skinner's findings have contributed to a paradigm shift in the field of genetics. “Instead of relying solely on DNA and inheritance, the field of epigenetics now demonstrates how environmental factors can also determine diseases in our future, and in our children and grandchildren's future,” Skinner said. “It's called transgenerational inheritance, the process by which something in the environment alters the health not only of the individual exposed to it, but also of that individual's descendants.”

Skinner explained that the term epigenetics refers to the things around DNA that regulate its activity but are independent of the DNA sequence. His lab focuses on chemical modifications of DNA called methylation. When methyl groups are added or removed from certain sections of DNA, they can change the way genes are regulated. Environmental factors, such as chemical exposures and nutrients, can influence the DNA methylation status and, according to Skinner, these changes can be passed on for multiple generations.

A few years ago, Skinner was studying sexual determination in rats during early stages of development. His lab exposed embryos to endocrine disrupting chemicals (EDCs), believing they would alter sexual development. To his disappointment, the EDCs did not change sexual determination. However, he did observe that embryos exposed to vinclozolin, a common fungicide, developed a high rate of disease as they became adults.

“This is when things got interesting,” explained Skinner. “Mistakenly, a lab member continued to breed the rats to the next generation, which would be the grandchildren of the mother that was exposed during gestation. We continued to see high levels of disease in the animals, even after four generations. The only way we could explain this event is through an epigenetic-type process,” said Skinner.

Skinner noted that his discovery is not limited to rats or the fungicide he fed them. “Other labs are reporting that environmental stimuli - nutrients, chemicals, or even smoking - are capable of altering the methylation status of genes and affect not only those individuals, but also their children and grandchildren.

Skinner proposes that DNA methylation status is defined during a critical developmental period of the germ line. Therefore, chemicals capable of permanently altering the male germ line epigenome during this time frame of DNA methylation programming can cause effects that persist for generations.

Skinner has identified several promoter regions that have altered DNA methylation three generations after the initial exposure and pinpointed common genomic features present in these regions. He has also identified a potential common consensus DNA motif among the regions that presented a transgenerational change in methylation.

These alterations appeared in the sons of the mothers exposed to the fungicide when they were pregnant, in the grandsons, and in the great-grandsons. The result is that because some genes in the mother that were supposed to be dormant were instead active, and some genes that were supposed to be active were not, males in succeeding generations developed abnormalities later in life.

Skinner is hopeful that advances in technology will allow for more cost-effective and accurate mapping of the epigenome in the near future. This will enable him to decipher, more precisely, which DNA elements are modified by exposures, and for how many generations those changes persist.