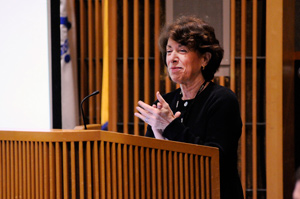 An excited NIEHS Director Linda Birnbaum, Ph.D., professed, “It's a good day for science at NIEHS!” Science Awards Day is an opportunity to celebrate the best the Institute has to offer. (Photo courtesy of Steve McCaw) 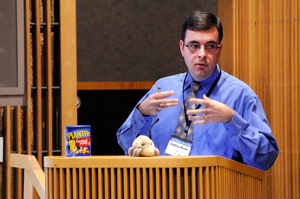 Mueller kept his audience engaged with visual aids supporting his talk on peanut and dust mite allergens. He is lead author on this year's Paper of the Year. Overall, nine papers were nominated for the award, with the winner being chosen by a distinguished panel of extramural scientists. (Photo courtesy of Steve McCaw)

In the early morning of Nov. 3, the NIEHS hallways were draped with nearly 90 posters, ready to impress spectators for the 8th annual NIEHS Science Awards Day. By the time the ceremonies concluded, four intramural scientists and four trainees were recognized by their colleagues for their meritorious research accomplishments. From the Early Career to Scientist of the Year, the awards showcased outstanding efforts from the Institute's most noteworthy contributors.

The distinguished Scientist of the Year award was presented to the originator of Science Day, former NIEHS Scientific Director Lutz Birnbaumer, Ph.D., head of the Transmembrane Signaling Group in the Laboratory of Neurobiology. He facetiously remarked how he expected to have received the award at the first annual Science Day.

In his seminar, Birnbaumer presented an overview of the transient receptor potential cation channels (TRPCs), their mode of action, and their physiological role. TRPCs are a class of molecules studied by Birnbaumer's laboratory.

The Laboratory of Structural Biology was featured prominently in this year's awards by producing the winners of the Early Career Award, Outstanding Staff Scientist, and the Paper of the Year.

The first author of the Paper of the Year, Geoffrey Mueller, Ph.D., a member of the Nuclear Magnetic Resonance Group, was also the recipient of the Outstanding Staff Scientist award. He presented the first scientific seminar of the day about allergens and their structural studies. By solving the crystal structure of the dust mite allergen Der p 7, Mueller and colleagues shed light on the possible mode of action of this allergen in triggering host immune response. The research (https://www.ncbi.nlm.nih.gov/pubmed/20226507)

was an excellent representation of collaborative efforts at NIEHS, with scientific contributions from the Laboratory of Structural Biology, Protein Expression Core Facility, and the Laboratory of Respiratory Biology.

Another shining star from the Laboratory of Structural Biology was Scott Williams, Ph.D., head of the Genome Stability Structural Biology Group and the winner of the Early Career Award. He was recruited by NIEHS in early 2010 as a lead researcher to develop his research interest in DNA break recognition and repair.

The NIEHS Trainees Assembly presented Donna Baird, Ph.D., from the Women's Health Group with the Mentor of the Year Award. Anne Marie Jukic, Ph.D., read several excerpts from the letters of support written for Baird by her pupils.

In the poster category, 88 posters were selected for display, representing all scientific branches of NIEHS. Among them, six exceptional abstracts earned the spotlight for their first authors, who gave oral presentations during the event.

(Negin Martin, Ph.D., is a biologist in the NIEHS Laboratory of Neurobiology Viral Vector Core Facility.) 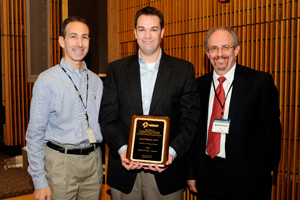 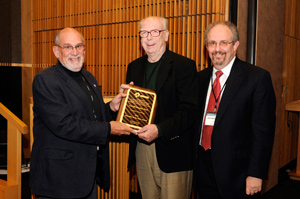