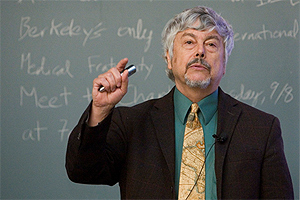 Smith is considered by many to be the father of the cookstove movement. He has spent decades in places such as India, China, Guatemala, and Nepal, studying the effects of biomass burning and indoor air pollution. (Photo courtesy of Kirk Smith)

Cooking stoves with chimneys can lower exposure to indoor wood smoke and reduce the rate of severe pneumonia by 30 percent in children less than 18 months of age, according to a new air pollution study funded by the National Institute of Environmental Health Sciences (NIEHS), part of the National Institutes of Health.

The study in the Nov. 10 issue of The Lancet showed that rates of severe childhood pneumonia were significantly reduced in households provided with a wood stove connected to a chimney, compared with homes where open, indoor wood cooking fires were used. The lead researchers at the University of California, Berkeley, report that carbon monoxide exposure levels were reduced 50 percent on average in the homes equipped with chimneys.

Though childhood deaths from pneumonia are relatively uncommon in the United States, it kills more children worldwide than any other disease, and open fires used for heating and cooking are thought to be a major cause. Pneumonia kills an estimated 1.4 million children each year.

“Exposure to smoke from cooking stoves is a major global public health problem that affects nearly half of the world's population and contributes to approximately 2 million deaths per year,” said Linda Birnbaum, Ph.D., director of NIEHS and the National Toxicology Program. “This is one of the first studies that shows how an intervention can reduce indoor air pollution from wood smoke, so people can live healthier lives.” Birnbaum noted that the paper's release also coincides with World Pneumonia Day (https://stoppneumonia.org/latest/world-pneumonia-day/)

on Nov. 12, which is geared toward raising awareness of the effects of pneumonia globally.

The NIH Randomized Exposure Study of Pollution Indoors and Respiratory Effects (RESPIRE) trial included a total of 534 households in rural Guatemala with a pregnant woman or young infant. The study participants were randomly assigned to receive a locally developed cookstove with a chimney or to continue cooking using traditional open wood fires. In all, 265 children were from the chimney-stove homes and 253 children were in the control homes. Trained field workers visited the homes every week for two years to record the children's health status. Sick children with cough and fast breathing were referred to physicians.

Although the study did not significantly reduce the total number of diagnosed childhood pneumonia cases, the reduction in severe pneumonia would likely result in reduced childhood mortality, according to the researchers.

“We found as large a benefit for severe pneumonia as more well-known public health interventions, such as vaccinations and nutrition supplements,” said Kirk Smith, Ph.D., lead researcher for the study and a professor of global environmental health at the University of California, Berkeley. “Future investments into viable, large-scale stove and fuel interventions to reduce child exposure to household air pollution are certainly worth making.”

(Ed Kang is a public affairs specialist in the Office of Communications and Public Liaison and a regular contributor to the Environmental Factor.)