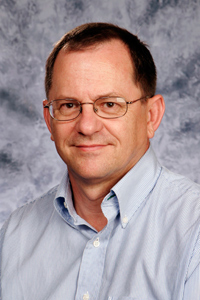 Armstrong said that the amino acid tyrosine that he mutated in TRbeta only occurs in mammals and doesn't appear in reptiles or fish. “In essence, what we've done in the mice is to make them frog-like or fish-like,” he said. (Photo courtesy of Steve McCaw) 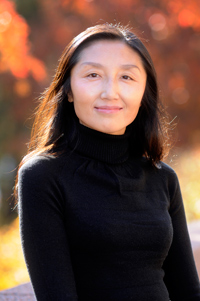 Mizuno presented the group's data at the 2011 Society for Neuroscience meeting. (Photo courtesy of Steve McCaw)

Work from the Membrane Signaling Group, led by David Armstrong, Ph.D., provides the first molecular evidence that during mouse brain growth, thyroid hormone changes the strength of nerve cell connections, or synapses, in the hippocampus, by activating phosphatidylinositol 3-kinase (PI3K). PI3K is an enzyme that is essential for cell development and survival, and altering synaptic strength in the brain's hippocampus is believed to be crucial for learning and memory. Their findings were presented Nov. 12-16 at the 2011 Society for Neuroscience (http://www.sfn.org/)

It turns out that thyroid hormone also has effects in the cytoplasm of a cell, joining many other hormones that stimulate PI3K.

Armstrong and his colleagues, Nina Storey, Ph.D., and John O'Bryan, Ph.D., who were at NIEHS at the time, first theorized there was a connection between thyroid hormone and PI3K. Their 2002 paper (https://www.ncbi.nlm.nih.gov/pubmed/11790300)

, which was published in the journal Current Biology, showed that the rapid effects of thyroid hormone on potassium channel activity in rat pituitary cells were blocked by drugs that inhibit PI3K.

In these latest experiments, Armstrong's team generated a mouse strain, by removing a single tyrosine in one of the receptors for thyroid hormone called thyroid receptor beta (TRbeta). Doing so prevented thyroid hormone from stimulating PI3K, without affecting the ability of TRbeta to bind DNA. According to Fengxia Mizuno, Ph.D., the research fellow in Armstrong's group who did the electrophysiology work, it did something else that no one expected.

“When I recorded the strength of synapses in hippocampal neurons from mice with the mutated TRbeta, they were much weaker than synapses in normal mice,” Mizuno explained. “Even the addition of thyroid hormone or neuronal activity couldn't strengthen them.”

Mizuno added that weaker synapses in the hippocampus may play a role in learning disabilities, and she hopes that the research will help scientists understand how learning and memory work, how the brain develops, and how environmental chemicals that disrupt this pathway make the brain vulnerable.

Armstrong said his conclusions made him wonder whether the physiological changes his team observed in individual neurons have an effect on the animal's behavior. It's the next logical step in his experiments, and the studies are currently underway in collaboration with Sheryl Moy, Ph.D. (http://www.psychiatry.unc.edu/directories/faculty/sheryl-s-moy-ph-d)

, associate professor in the Department of Psychiatry at the University of North Carolina at Chapel Hill School of Medicine.

In addition, Armstrong's group is attempting to put the human TRbeta into the mutant mice strain to see if it will rescue the effect. Because the hippocampus is an ancient part of the brain, Armstrong insists there isn't a big difference at the cellular level between humans and mice.

Being the first group to show that thyroid hormone has a rapid effect on PI3K production was a thrill, but uncovering the molecular mechanism and showing how a single amino acid change in one protein could have such a profound effect on synaptic function is just as gripping.

“We're excited that our basic research is turning out to have physiological significance,” Armstrong said. “Now, we hope to use our understanding of the mechanism to identify chemicals in the environment that disrupt thyroid hormone signaling.”