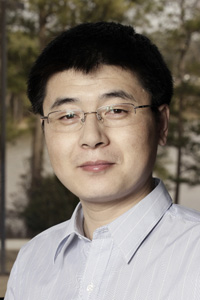 Trained as a biochemist and structural biologist at the University of North Carolina at Chapel Hill, Wang has made significant contributions to defining phosphodiesterase structures and exploration of phosphodiesterase inhibitors for potential therapeutic benefits. Wang acknowledged the guidance of Traci Hall, Ph.D., on this important project. (Photo courtesy of Steve McCaw) 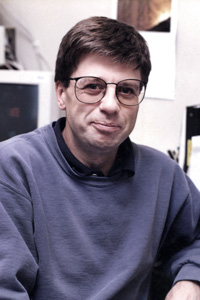 Shears is excited about further examining the role of IP8 and PPIP5K2 in regulating compartmentalization of cell signaling, as well as their physiological significance. (Photo courtesy of Steve McCaw)

In a new study published in Nature Chemical Biology, NIEHS researchers describe, for the first time, the crystal structure of a key inositol pyrophosphate kinase, PPIP5K2. Huanchen Wang, Ph.D., an Intramural Research Training Award fellow in the NIEHS Laboratory of Signal Transduction (LST) and 2012 Fellows Award for Research Excellence winner, was first author on the paper by a team of researchers from the LST Inositol Signaling Group, NIEHS Laboratory of Structural Biology, and University of Texas Southwestern Medical Center.

The enzyme's product, bis-diphosphoinositol tetrakisphosphate (IP8), is emerging as a regulator of the compartmentalization of cell signaling enzymes, which in turn determines the specificity of signaling responses, such as insulin signaling and neutrophil function, in innate immunity.

In the study, atomic structures of the kinase domain of human PPIP5K2 were analyzed. “These analyses provide molecular insight into the evolution of a specialized catalytic environment,” commented lead researcher Stephen Shears, Ph.D. (https://www.niehs.nih.gov/research/atniehs/labs/stl/pi/inositol/index.cfm), senior author on the study. “This work shows how a signaling molecule with unrivaled phosphate congestion can be synthesized.” Wang added, “This structural information will also be useful for developing small-molecule inhibitors of the kinase for possible therapeutic benefit.”

“This phenomenon appears to explain how IP7 and IP8 can antagonize signaling by insulin, and also regulate neutrophil function,” continued Shears. “That is, work with the inositol pyrophosphates has helped us understand micro-compartmentalization of cell signaling, one of the major current goals in this field.”

Phosphate groups are large and electrostatically charged, so their natural tendency is to repel each other. The catalytic challenge for PPIP5K2 is to add one more phosphate to a molecule, IP7, that already has seven phosphates crowded around a small six-carbon inositol ring.

Wang's structural approach to understanding how phosphate crowding is surmounted reveals a catalytic site in which an array of positively charged amino acid residues in the enzyme interact with phosphate/pyrophosphate groups of IP7 and the donor phosphate from ATP. This interaction neutralizes their negative charges, thereby minimizing electrostatic repulsion. Furthermore, the presence of crystals of PPIP5K2 in complex with a transition-state mimetic suggests an inline associative reaction mechanism, further explaining how the enzyme overcomes the energy barrier to efficient catalysis.

Wang explains that the team's stereoselective resolution of the structure will now permit the chemical synthesis of physiologic isomers, the deciphering of their molecular interactions with receptors, and the design of antagonists. “Overall, the structural information obtained from this study offers directions for studying the evolution of active-sites of diverse phosphoryl transferases,” Wang said, “and also offers templates for an underdeveloped area of research - the rational design of inhibitors that specifically target a particular inositol phosphate kinase.”