A conversation on the state of autism research 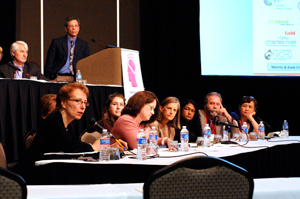 At the International Neurotoxicology Conference Oct. 30-Nov. 2 (see related story (https://factor.niehs.nih.gov/2011/december/science-neurotox27/)), the Environmental Factor sat down for an in-depth interview with Health Science Administrator Cindy Lawler, Ph.D., of the NIEHS Division of Extramural Research and Training. Lawler leads a portfolio of autism-related research, and she shared her thoughts about the meeting and the state of the science.

The Factor: The content of this meeting seems to fit in well with the NIEHS mission and current research portfolio.

Lawler: “I think it does. We have had a very healthy investment in neurodevelopmental toxicology for many years, but environmental insults are not often going to lead to a frank disease. Many of the outcomes we're looking at are more subtle, such as cognitive impairments. We are making inroads into how environmental insults potentially contribute to clinical disorders - autism is one example, but there's work in the ADHD field as well, and now schizophrenia.”

It seems that the field has moved beyond whether environmental insults have an impact upon those disorders to more focused research on specific interactions and mechanisms. Is that an accurate assessment?

“I think that's a very insightful comment. When I came to NIEHS ten years ago, people were beginning to be concerned about the big rise in autism. Every paper on autism was about genetics, genetics, genetics. And now, although progress is never fast enough, I'm in a position to see what I consider to be very good scientific progress. Even among the autism genetics investigators, there is acknowledgment that environment is involved, and it's no longer just that we'll eventually find genetic causes for every single case. In one sense it's a small step, but there is this acknowledgment that the real answer is going to have to involve looking at both environmental and genetic risk. That doesn't mean that it's easy to do - it's very, very difficult.”

“The real continued progress in autism or ADHD or schizophrenia is, for our Institute, going to depend on the types of developmental tools and approaches that we're hearing about at this meeting. They are not going to come from researchers trying to look for associations between exposures and disease, they're going to come from, for instance, the exposure science arena, where people are developing better ways to capture exposures in the same way that you can capture the whole genome.”

Do you think any of the ideas we've heard about at this meeting approach being ready for translation into prevention, therapy, or even public health policy?

“I think most of what we've heard here is meant to be provocative. There's a solid foundation of proof of principle. For example, there's every reason to believe that the immune system is dysregulated in autism. And there's increasing evidence that disrupted thyroid signaling is involved somehow. But thyroid signaling is incredibly complex, and the clinical phenotypes that are present are complex as well.

In the case of how that might apply to something like autism risk, it's really difficult to see how at this point in time you could apply that knowledge directly. That doesn't mean that that's not where we hope to go with it, but I think now it would be a little premature to think about a lot of direct translation to the clinic.

In the case of endocrine disruptors, our Institute has a really strong interest in that, but they are a class of chemicals that has not been a major focus of work in the autism arena. There's been a little bit of work with compounds that act through the thyroid, affecting hormone signaling, but overall they've been a little bit neglected, so this meeting is meant to stimulate interest.”