A genomics approach toward understanding autism 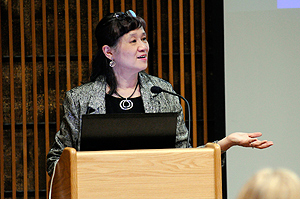 In a moment of jocularity, Hu noted the mildest case of autism spectrum disorder often results in personalities similar to many scientists she has encountered. (Photo courtesy of Steve McCaw)

Valerie Hu, Ph.D., visited NIEHS Nov. 2 as part of the continuing Keystone Science Lecture Seminar Series sponsored by the Division of Extramural Research and Training. Hu's presentation, titled “An Integrative Genomics Approach toward Understanding, Diagnosis, and Personalized Treatment of Autism Spectrum Disorders,” explored how genomics data may help to understand the causes, and improve the diagnosis and treatment, of autism spectrum disorders.

Hu is a professor of biochemistry and molecular biology at the George Washington University School of Medicine and Health Sciences. Although she has researched many scientific areas over the years, she became interested in autism seven years ago for a very personal reason - she has a son who is affected by the disorder. Her research has led her to explore how dividing autism cases into subgroups can promote the identification of genes associated with the disorder. Additionally, she is investigating the role of epigenetic mechanisms and environmental factors that may influence the disease pathology.

A biological diagnosis for autism

Hu explained that autism cannot be thought of as a single disease, but rather a collection of disorders that spans a broad continuum, with major symptoms including deficiencies in social interaction, language or communication abnormalities, restricted or repetitive behaviors, and savant-like skills in about 10 percent of cases. Due to the variety of symptoms and severities of autism spectrum disorder, it is believed to have multiple etiologies.

Currently, autism spectrum disorder is only diagnosed through behavioral observations, such as the Autism Diagnostic Interview Revised (ADIR) assessment. Classical genetic studies have not been successful in associating genes with increased risk for autism, perhaps due to its heterogeneous nature. Hu's insight led her to use ADIR scores to classify autism spectrum disorders into subgroups, prior to analyzing genome-wide association data. Interestingly, she found single nucleotide polymorphisms, or SNPs, unique to each subgroup that could allow autism to be diagnosed with over 98 percent accuracy. This discovery could eventually lead to a biological determination of autism, to supplement current behavioral observations that have multiple drawbacks.

Armed with the knowledge that autism has a variety of causes and symptoms, Hu used gene expression profiling of lymphoblastoid cell lines to look at genes unique to certain subclasses of autism spectrum disorder. In the case of individuals who displayed the most severe language disruptions, she found a number of genes linked to circadian rhythm that suggested potential treatment options. For example, the AA NAT gene, which encodes an enzyme necessary for the production of melatonin, was found to be uniquely linked to this subtype, suggesting that melatonin treatment may be useful in alleviating some of the common sleep deprivation symptoms commonly reported in this population.

Similarly, linkage of DYPD, a gene commonly deleted in patients who suffer seizures, suggests that anticonvulsant medications may benefit this subgroup of autistic individuals. Hu hopes that, in the future, by understanding the mechanisms behind an individual case of autism, doctors will be able to deliver personalized treatment plans based on the patient's specific gene expression profile.

Hu has expanded beyond simply looking at gene expression, to include studies that examine the role epigenetic modification might play in influencing autism. By combining her gene expression studies with global epigenetic analysis, Hu discovered that RORA, an orphan nuclear receptor related to the retinoic acid receptor, is specifically methylated in autistic individuals, leading to its decreased protein expression in the brain. Furthermore, she went on to show that estrogen upregulates the expression of RORA, while testosterone downregulates its expression. Coupled with the fact that RORA regulates an enzyme that converts testosterone to estrogen, this may partially explain the observation that autism spectrum disorder is more common in males than females. Additionally, as RORA is the first hormonally responsive gene linked to autism, it may be a link between autism and endocrine disrupting chemicals in the environment, an area she would like to explore in the future.

(Brant Hamel, Ph.D., is a postdoctoral fellow in the NIEHS Molecular Endocrinology Group.)