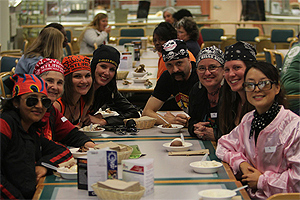 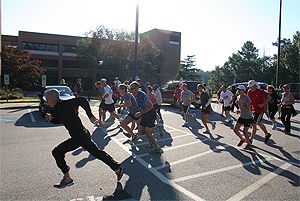 With the annual bake sale and silent auction Nov. 18, NIEHS brought its promotion of the 2011 Combined Federal Campaign (CFC) to a close, with an impressive collection of $82,152 in charitable contributions. CFC, which this year celebrated its 50th anniversary, is an annual fundraising drive, which collects cash and payroll deduction pledges from federal and military employees, for donation to local, national, and international nonprofit organizations.

While the events and marketing have officially ended, CFC organizers are quick to point out that pledges will continue to be accepted through Dec. 15, with an ultimate goal of reaching $105,000.

“We really want to thank everyone who participated in this year's campaign,” said Ron Cannon, Ph.D., staff scientist and NIEHS CFC co-chair. “Times are tight for a lot of people right now and yet everyone here at NIEHS really stepped up with some generous donations.”

Beyond the bake sale and silent auction, this year's campaign presented employees with a number of ways to get involved. Other events included a charity fair, ice cream social, 5K walk/run, used book and DVD sale, Halloween costume contest, and raffle drawing for an Apple iPad 2.

“Donations don't have to be enormous to have an enormous impact,” noted Cindy Innes, a biologist with the NIEHS Environmental Stress and Cancer Group and CFC co-chair with Cannon. “If a lot of people give a little bit, even if it's just a few dollars per pay period, that goes a long way.”

To learn more about CFC, or to make a pledge online, visit Combined Federal Campaign of Carolinas (https://www.carolinascfc.org)

(Ian Thomas is a public affairs specialist with the NIEHS Office of Communications and Public Liaison.)


"Intramural Papers of the..." - previous story