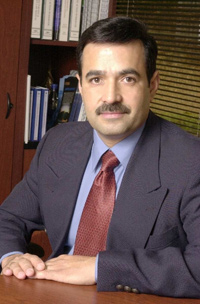 NIH Hispanic Employment Program Manager Gerard Roman will lead support services to NIEHS as the Institute's NIH equal opportunity and diversity management specialist, according to an Aug. 23 announcement by NIH. He fills a void created with the departure of former NIH Equal Employment Opportunity (EEO) Specialist Ginny Ivanoff, ensuring a continuity of equal opportunity and diversity promotion management for the Institute's employees and managers.

Roman said of his new role, "It's good to be once again connected to the NIEHS. ... In this added role, I look forward to becoming more involved in serving as a liaison to the services provided to the NIEHS by the NIH Office of Equal Opportunity and Diversity Management (OEODM)."

As part of OEODM, Roman works with a team of professionals who manage equal opportunity and diversity promotion for an 18,000-person NIH workforce. At NIEHS, he will assist with action items related to national and internal reports on equal opportunity and diversity, provide information sessions for managers and supervisors, work on disability employment issues, and help mediate employee and management concerns.

"There's never a boring minute," Roman said of the job. "Most of our work at OEODM is typically performed behind the scenes."

Roman has worked in the field of equal opportunity and diversity promotion for nearly 20 years. In 1990, while serving in the Army Roman was selected for training and a special assignment at the Department of Defense Equal Opportunity Management Institute. His last assignment was as the senior equal opportunity staff advisor for three installations overseas servicing more that 15,000 military service members, Department of Defense civilians, and local nationals.

Following a distinguished 20-year military career and two years of civilian federal service, Roman joined NIEHS in 2002. He became part of the NIH OEODM after the office underwent reorganization in 2006.

Roman has completed training in EEO and human relations, with equal opportunity advisor, equal employment officer, and equal employment specialist resident courses from the Department of Defense Equal Opportunity Management Institute. He has a B.S. from Troy State University in Alabama and a master's in human relations from the University of Oklahoma. Roman is now completing his final research project for a Ph.D. in human services from Walden University.

"Over the years, I've seen how the functions of equal employment opportunity have expanded from overseeing civil rights and equal employment protections, to more involvement in the intricate area of workforce diversity," Roman explained. "In my new role here at NIEHS, I am committed to providing the most professional support possible and help the employees who make NIEHS a great place to work."