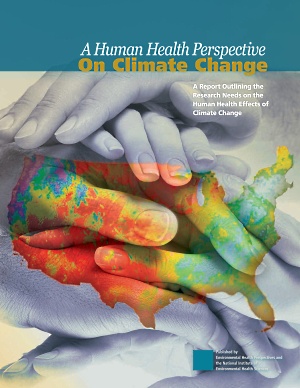 The interagency working group report was published April 21. NIEHS was the NIH lead on the white paper, which helped drive the new funding opportunity.

will fund research for up to two years.

The earliest date that applications could be accepted for the grants was August 28. A second and third round of applications will be accepted beginning April 24, 2011 and April 24, 2012. Letters of intent should be sent to NIEHS Program Administrator Caroline Dilworth, Ph.D. (dilworthch@niehs.nih.gov) Electronic submission is required.

According to the FOA, a better understanding of how climate change will alter human health risks in the United States and globally, and who will be most vulnerable to adverse health effects, is critical for reducing or preventing illness and death. The ultimate goal of the research program is to help inform climate change adaptation and public health interventions to reduce the current and future vulnerability of various at-risk populations.

The program has its roots in recent workshops and papers coordinated by several NIH ICs, including NIEHS, to identify research needs on the human health impacts of climate change. NIEHS was the lead for NIH on an ad hoc Interagency Working Group on Climate Change and Health (IWGCCH) that recently released a white paper outlining research needs for eleven categories of human health consequences of climate change.

The white paper expressed concerns about the effects of climate change on asthma and respiratory disease, cancer, cardiovascular disease and stroke, foodborne diseases and nutrition, human developmental effects, mental health and stress-related disorders, neurological diseases and disorders, vectorborne and zoonotic diseases, waterborne diseases, and weather-related morbidity and mortality. The report underscored the need for more research to assess and characterize population vulnerability to adverse health impacts due to climate change.

as described in the FOA: