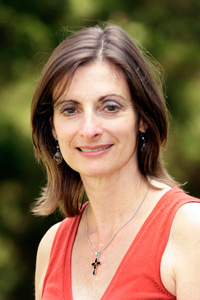 Hewitt said she learned of the volunteer opportunity through a conversation with Jorgensen following her talk on gonad development at NIEHS last November. The talk was part of the LRDT Seminar Series. (Photo courtesy of Steve McCaw) 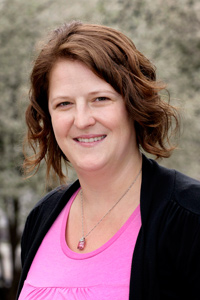 Binder has been at NIEHS only a few months, but she's already complementing her training at the bench with career development experiences in other areas of science. (Photo courtesy of Steve McCaw)

NIEHS scientists Sylvia Hewitt and April Binder, Ph.D., were among some 50 volunteers at the first annual Society for the Study of Reproduction (SSR) pre-meeting outreach day July 29. The daylong hands-on learning experience for local students at Marquette University Biological Campus featured fun labs and other activities organized around the theme, Imagine: The Science of Reproduction and You.

Hewitt is a senior biologist and Binder is an Intramural Research Training Award postdoctoral fellow in the NIEHS Receptor Biology Group headed by Chief of the NIEHS Laboratory of Reproductive and Developmental Toxicology (LRDT) Ken Korach, Ph.D. Both were authors on posters presented at the meeting. Hewitt was co-author on two abstracts from the Receptor Biology Group, and Binder was first author on an abstract from her Washington State University doctoral program.

Hewitt said part of her motivation for volunteering came from experiences working with youth at her church. Binder said she was interested in working together and networking with other members of SSR, as well as having a chance to share her enthusiasm about reproductive science with the students.

Supported by a grant from the Burroughs Wellcome Fund and sponsored by SSR, Marquette University, University of Wisconsin (UW)-Madison, and UW-Milwaukee, Imagine attracted approximately 150 students, many of them minority students at inner city schools. Some of the students were participants in summer programs at Marquette and UW-Milwaukee and members of the local YMCA Youth Leadership Academy.

Students could participate in three of the program's six fun labs, have lunch with SSR graduate students, and sign up to attend SSR scientific sessions with their new mentors. Hands-on activities ranged from dissection of a sheep brain to an artificial insemination exercise using a life-size model cow. In the afternoon, students heard from a career panel of SSR graduate students and a research career panel of SSR members, who helped the students imagine a future for themselves as clinicians and researchers.

, who did her part to develop the workshop theme with a talk titled, "You Can Do It!" Hutcherson graduated from Milwaukee's predominately black Harold S. Vincent High School and Marquette University. She is a former Advanced Opportunity Fellow studying polycystic ovary syndrome as part of her master of science program.

An idea whose time has come

The workshop was the brainchild of organizer Joan Jorgensen, D.V.M., Ph.D., (http://www.vetmed.wisc.edu/people/jsjorgensen)

a professor in the UW School of Veterinary Medicine. Jorgensen took advantage of scientists, students, and trainees who planned to attend the 2010 SSR Annual Meeting and were willing to arrive in Milwaukee a day or two early to help set up wet labs and work with students. She also brought along information about the veterinary program at UW.

Hewitt said, "It was fun to be a part of outreach day," and she plans to volunteer for next year's workshop to be held just before the 2011 SSR meeting in Portland, Ore. Binder, who also chaperoned students arriving at the workshop by bus, said, "I love the energy and enthusiasm of the kids, and I hope to be involved again next year. It's a great way to learn how to explain your science to people with limited science backgrounds and, hopefully, motivate youth to explore scientific careers in the future."