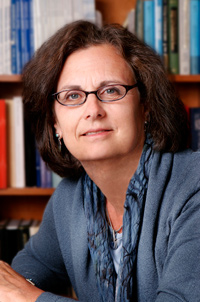 Sandler will lead the first health study of its kind on a major oil spill in U.S. waters. (Photo courtesy of Steve McCaw)

The National Institutes of Health will launch a multi-year study this fall to look at the potential health effects from the oil spill in the Gulf region. The GuLF STUDY, announced by NIH Director Francis S. Collins, M.D., Ph.D., in June, is in response to the largest oil spill in U.S. history, caused by the explosion of the Deepwater Horizon offshore drilling oil rig in the Gulf of Mexico. Collins pledged $10 million in NIH funding for the study's initial phases. Collins asked NIEHS to lead the research project.

To help expedite the launch of the study, BP will contribute an additional $10 million to NIH for this and other important health research. The BP funding will come through the Gulf of Mexico Research Initiative (GRI). The GRI is a ten-year, $500 million independent research program established by BP to better understand and mitigate the environmental and potential health effects of the Gulf spill. The NIH will have full autonomy regarding the distribution of the $10 million, with input from external scientific experts in environmental health who are familiar with the Gulf region.

"It was clear to us that we need to begin immediately studying the health of the workers most directly involved in responding to this crisis," said Collins. "The donation from BP will help speed our work with CDC [Centers for Disease Control and Prevention], EPA [U.S. Environmental Protection Agency], and other federal agencies, academia, as well as state and local partners to carry out this important study."

The study will focus on exposure to oil and dispersant products, and potential health consequences such as respiratory, neurobehavioral, carcinogenic, and immunological conditions. The study is also expected to evaluate mental health concerns and other oil spill-related stressors such as job loss, family disruption, and financial uncertainties.

"Cleanup workers are likely to be the most heavily exposed of all population groups in the Gulf Coast region," said Dale Sandler, Ph.D., chief of the Epidemiology Branch at NIEHS and lead researcher on the study. "We plan to enroll workers with varying levels of exposure. For example, we hope to recruit workers involved in oil burning, skimming and booming, equipment decontamination, wildlife cleanup, and also those with lower exposure such as shoreline cleanup workers. We'll also recruit some people who completed the worker safety training, but did not have the opportunity to do any cleanup work. They will be our study controls."

Sandler added, "What we learn from this study may help us prepare for future incidents that put communities at risk."

The current focus of NIEHS is to ensure that the Gulf communities most affected by the oil spill have a say in the study's design and implementation, as well as input into future research directions. The NIEHS is hosting webinars and other community engagement activities to obtain input.

"Community involvement and participation is critical to the success of this study," said Linda Birnbaum, Ph.D., director of NIEHS and the National Toxicology Program.

NIH and the U.S. Department of Health and Human Services have had a continuous presence in the Gulf since the explosion occurred. The NIEHS Worker Education and Training Program (WETP) used its 24 years of experience preparing people for hazardous conditions to contribute to training more than 100,000 workers in the Gulf, so they could safely clean up the oil spill. The WETP also distributed thousands of pocket-sized training booklets in English, Spanish, and Vietnamese, so workers have the information they need to protect themselves. The WETP materials are available online (https://www.niehs.nih.gov/careers/hazmat/).

(Robin Mackar is News Director in the NIEHS Office of Communications and Public Liaison and a regular contributor to the Environmental Factor.)

About 50 leading scientists gathered in Tampa, Fla. Sept. 21 for an Institute of Medicine (IOM) meeting to finalize the design of the ambitious Gulf Worker Study, which expects to start enrolling subjects next month.

Among the attendees were representatives from NIH and NIEHS who want to take the necessary steps to engage public trust with a well-designed study that will meet expectations of people in impacted communities along the Gulf Coast. NIEHS is also receiving scientific and community input through a series of webinars.

According to a report in the St. Petersburg Times, Collins told fellow participants at the meeting that the GuLF STUDY is different from most research projects because of the degree of public skepticism, the intense public concern over the issue, and the potential for lawsuits.