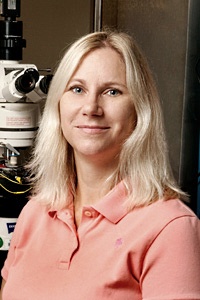 Dudek said that NIEHS "funds me to do what I love to do most - science." (Photo courtesy of Steve McCaw)

Armstrong said the decision to grant tenure was largely influenced by Dudek's discoveries linking electrical signaling and rapid gene expression in neurons, and the regulation of synaptic plasticity. Armstrong also emphasized Dudek's enthusiasm for collaborating with NIEHS staff. "She interfaces with all the other investigators in our branch," he said. "She is the scientific hub of the laboratory."

Dudek also received support from NIEHS Acting Scientific Director David Miller, Ph.D., who was delighted with the confirmation of her tenure, stating, "Serena is a bright and accomplished neurobiologist who has already made a name for herself."

Finding the proper sentiment to explain her feelings on getting tenure was difficult for Dudek. She admitted, "It's really gratifying that my colleagues find my research at a high enough caliber." Jokingly, she confessed that the prospect of moving to a new office with a window was frosting on the cake. Dudek hopes that tenure will also bring more space and resources for her research in the future.

Writing from Moscow, Natalia Bastrikova, Ph.D., Dudek's former research fellow from 2004 to 2009, emphasized three personality traits that make Dudek highly successful: innovative, open-minded, and supportive. She continued, "For her, science is never tight and defined facts. This is a journey into discovery."

Dudek's career researching synaptic plasticity has spanned almost 25 years. She began studying the topic as an undergraduate and, in 2010, received the A.E. Bennett Research Award from the Society of Biological Psychiatry for research by a young investigator.

Based on the unique complement of neurotransmitter receptors and other molecules, Dudek predicts that the CA2 will play an important role in the pathology associated with autism spectrum disorders. Her work on CA2 has already led her to discover a new role by which caffeine exerts its effects and the remarkable role of the CA2-enriched "Homer Simpson gene (RGS14)."

Dudek's studies permit insights into how environmental factors cause brain disease through its impact on neural circuitry. Her research succinctly fits the mission of the NIEHS, a vigorous supporter of her tenure application.