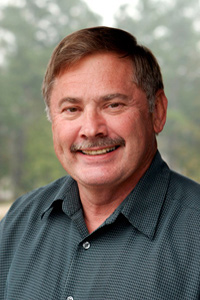 Ron Mason, Ph.D., this year's Bruker Award recipient, based the immuno-spin trapping technique on his novel idea of using spin-traps as tags. Spin-traps bind to the atoms in a macromolecule where a free radical is located.
(Photo courtesy of Steve McCaw)

for his "major contribution to the field of ESR spectroscopy."

Mason has the honor of an invitation to give the Bruker Prize Lecture at the 43rd Annual International Meeting (http://esr-group.org/old/conferences/esr2010/)

of the ESR Spectroscopy Group of the RSC (http://esr-group.org/)

at Cardiff University, Cardiff, Wales, on March 23, although NIH ethics policy prevents him from receiving the cash prize

Mason, head of the Free Radical Group, was recognized as "a world leader in the development and application of the spin-trapping technique ( see text box) for use in chemical, biological, and medical systems, as well as in the application of ESR to the study of oxidative stress molecular mechanisms," said ESR Spectroscopy Group Chairman David Collison, Ph.D., professor at The University of Manchester, Manchester, United Kingdom. Mason's work on the characterization of tryptophan and tyrosine free radicals in proteins was also cited as important research.

"Dr. Mason is a pioneer and a visionary in free radical research," said Dario Ramirez, Ph.D., principal investigator at the Oklahoma Medical Research Foundation and former Mason laboratory research fellow. "I am not the first to recognize Dr. Mason as a great advisor, friend, and a brilliant scientist." Ramirez continued, "This honor is greatly deserved."

, RSC ESR Spectroscopy Group Committee members, and the presidents or chairs of other National and International Electron Paramagnetic Resonance Societies nominate candidates for the Bruker award.

(Laura Hall is a biologist in the NIEHS Laboratory of Pharmacology currently on detail as a writer for the Environmental Factor.)

Mason's laboratory developed the pioneering immuno-spin trapping technique that allows oxidative radicals induced by reactive oxygen species to be immuno-chemically quantified directly by virtually any scientist. This technique gives researchers the ability to track the appearance and disappearance and the location of free radicals in cells -- allowing a much better understanding of free radical involvement in cellular processes and disease development.