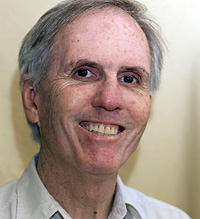 Kennedy, above, was honored by his colleagues at UCD. (Photo courtesy of Bruce Hammock)

for promoting interdepartmental collaborations. "For a quarter century Dr. Kennedy has worked to remove administrative barriers to interdisciplinary research," Hammock said. "This is illustrated by his collaborative research evolving from combustion of toxic waste to one of the first federally funded programs in nanotechnology, to the use of nanotechnology in the design of biosensors for both environmental and medical technology."

One of Kennedy's many collaborators, NIEHS grantee Isaac Pessah, Ph.D., a UCD veterinary molecular bioscience professor, stated, "Ian often has an innovative engineering solution for those of us trying to measure the unmeasurable."