Council Looks Ahead During Spring Meeting 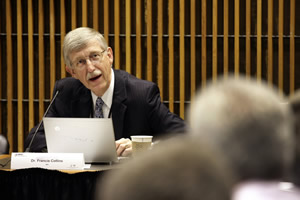 Collins gave members ample opportunity to ask questions about his hope that NIH can help transform "a sick-care system into a health-care system."

The May 12-13 meeting of the National Advisory Environmental Health Sciences Council (NAEHSC) at NIEHS meant a busy day and a half as members faced an agenda packed with new concept clearance proposals. Although they met their task with confidence and enthusiasm, the mood was tempered by concern over budget projections and the implications of the Gulf of Mexico oil spill. The meeting presentations (https://www.niehs.nih.gov/about/boards/naehsc/agenda/index.cfm) showcased the accomplishments of the Institute's extramural program staff, communications team, intramural research, and oil-spill response effort.

The meeting opened on an upbeat and positive note, as the group heard praise for the "remarkable scientists and leaders at NIEHS" and the Institute's accomplishments from NIH Director Francis Collins, M.D., Ph.D., (see story (https://factor.niehs.nih.gov/2010/june/spotlight-collins.cfm)). Midway through his talk, however, Collins described a looming budget shortfall in fiscal year 2011. Despite several promising developments at NIH, Collins cautioned the group, "Nothing changes the fact that we've got a cliff there," as funding flattens or fails to keep pace with inflation and increased personnel costs. 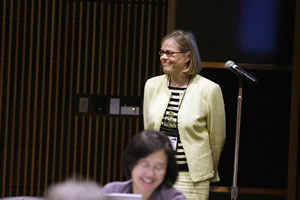 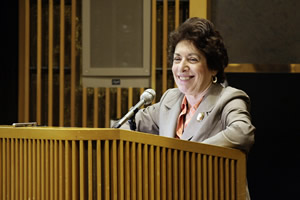 Birnbaum had reason to be upbeat, as she reported on significant progress toward many of the objectives she outlined at Council meetings in 2009 in the months following her appointment as director. 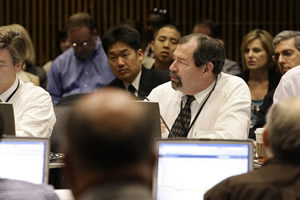 Member Steven Lloyd, Ph.D., center, was so impressed by the Oceans and Human Health proposal that he suggested allocating even more funding to the program. Lloyd is a professor at Oregon Health and Science University. 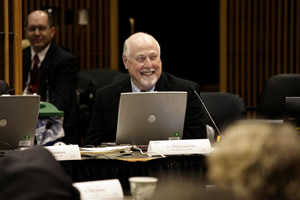 Member Hillary Carpenter, Ph.D., a toxicologist with the Minnesota Department of Health, said of the climate change concept, "This program could fill a real data need faced by state health departments." 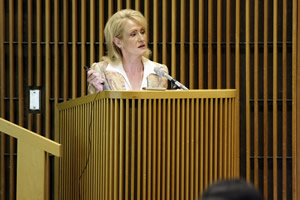 Responding to a request from the February meeting of Council, NIEHS Office of Communications and Public Liaison Director Christine Flowers described her team's accomplishments in raising the visibility of NIEHS and fine-tuning its communications strategies.

With a presentation at the end of their meeting on the NIEHS response in the Gulf, members were also reminded of potentially far-reaching effects on the environment and public health that are rapidly outstripping the meager resources available to responders.

Following the director's report, members heard a presentation on the NIH Basic Behavioral and Social Science Opportunity Network (OppNet) by NIEHS Acting Susceptibility and Population Health Branch Chief and program liaison Claudia Thompson, Ph.D., and OppNet Coordinator William Elwood, Ph.D. According to the speakers, the program offers funding opportunities for researchers exploring the psychosocial aspects of the environment and the interaction of mechanisms of behavior, social functioning, biology, and environment that affect human health and wellbeing.

Most of the rest of the meeting was devoted to six concept clearance proposals by extramural program administrators that promise to build on existing grant programs in innovative and productive ways as well, as strengthen inter-agency and inter-division partnerships to maximize available resources. Council members remained engaged and supportive as extramural staff outlined their proposals, voting unanimously in favor of proceeding with each one of them:

A science presentation by Laboratory of Pharmacology and Toxicology Chief David Miller, Ph.D., followed the extramural concept reports. Miller reported on the translation implications of his research into the blood-brain barrier on drug delivery, mitigating the effects of environmental exposures, and intervening in Alzheimer's disease (see story (https://factor.niehs.nih.gov/2010/june/science-p-glycoprotein.cfm)).

In a report that was as timely as the evening news, NIEHS Worker Education and Training Program Director Chip Hughes gave the final presentation of the meeting with a summary of his experiences as part of the "just-in-time" federal response effort to the massive oil spill in the Gulf. He conceded the effort may also be "just too late" to prevent long-term adverse effects on the health of residents and clean-up workers (see story (https://factor.niehs.nih.gov/2010/june/spotlight-spill.cfm)).


"The Power of Partnerships..." - previous story