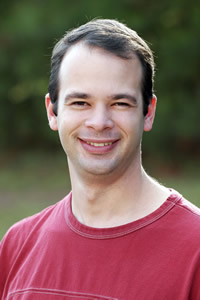 Along with developing his scientific career, Chorley, above, nurtured interpersonal and communications skills in the course of his training at NIEHS. (Photo courtesy of Steve McCaw)

Heading a research group at EPA

In his new position at the EPA, Chorley will head a research group functioning in a collaborative environment. He described the structure of the EPA as "more applied and team-oriented, with multiple principal investigators working on the same project." Due to the nature of the specific problems EPA researchers work on, he said, "Negative data is just as important as positive data in determining whether a chemical is detrimental to human health."

When asked about his short-term career goals, Chorley stated, "I would like to stay in this new position, grow as an investigator, and expand my program by eventually adding post-docs and biologists to the lab." As his career evolves, he sees a possible transition from the bench to an administrative role. Because the EPA is an institution with a large regulatory component and an environment conducive to such career transitions, he has the opportunity to pursue basic science questions, answers to which can lay the groundwork for future policy and regulatory decisions.

The combination of skills he developed while at NIEHS made Chorley a desirable candidate for the EPA position. He stressed that "fellows get experience which will help you if you want a specific job." In addition to his research work ( see text box), Chorley pursued interests in teaching, policy, and science communications by seeking out experiences that would give him familiarity with these fields. He was a regular contributor to the Environmental Factor for the past year and a half, developing a portfolio of nearly 20 feature stories. He also participated as a guest teacher during North Carolina DNA Day, and observed meetings of the Clean Air Scientific Advisory Committee.

As he balanced his research and career development activities, Chorley also recognized the importance of networking and getting involved. As a fellow, he interacted with some of the EPA scientists he will work with by attending local meetings of the Genetic and Environmental Mutagenesis Society (GEMS). Coordinating the LMG seminar series and organizing the annual retreat as a member of the LMG Trainee Action Committee provided valuable opportunities for interaction with internationally recognized scientists and scientific peers. Additionally, Chorley took advantage of opportunities to present his research findings at local and national meetings in the form of both invited talks and poster presentations.

(Sophie Bolick, Ph.D., is a postdoctoral research fellow in the NIEHS Laboratory of Molecular Carcinogenesis Molecular and Genetic Epidemiology Group.)

At the Bench in NIEHS Labs

A native North Carolinian, Chorley received both his undergraduate and graduate degrees at North Carolina State University. His work on NRF2, a gene involved in oxidative stress, bridges work done in the LMG and Laboratory of Respiratory Biology (LRB). Chorley used a combination of bioinformatics and molecular biology approaches to identify putative functional Nrf2 binding sites in the human genome as he trained under the guidance of LMG Principal Investigator Douglas Bell, Ph.D. (LMG) and Steven Kleeberger, Ph.D., LRB principal investigator and acting deputy director of NIEHS.

Chorley advises fellows, "to learn front end skills yourself, because the EPA felt it important for me to communicate with the Bioinformatics Core in my new position." Chorley's findings on NRF2, an important player in cellular response to oxidative stress, have led to several exciting lines of research in the Environmental Genomics Group.

Chorley described Bell and Kleeberger as important influences on his training at NIEHS and supportive mentors. "Dr. Bell and Dr. Kleeberger always worked with me when I explored opportunities inside and outside the lab," he said, "and I am grateful to them for the quality training I received here as well as their personal interest in my career plans."