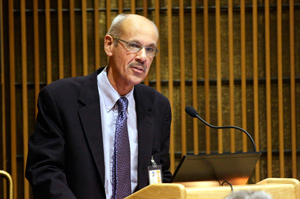 "Every child will get RSV," Matalon said. "Two to three percent of these cases will require hospitalization." RSV is also "as deadly as it can come if you are immuno-compromised, irrespective of age," he added. (Photo courtesy of Steve McCaw) 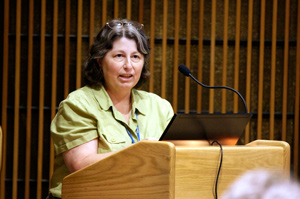 Susceptibility and Population Health Branch Program Administrator Elizabeth Maull, Ph.D., introduced NIEHS grantee Matalon. She mentioned that he has received many honors including a Fulbright Scholarship while attending Macalester College and, just this year, an honorary Doctor of Science from the University of Thessaly in Greece. (Photo courtesy of Steve McCaw) 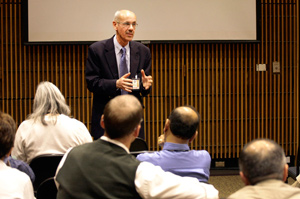 From his work on RSV and chlorine exposure interactions, Matalon knows that some people will be more susceptible to lung damage from chlorine exposure. "Although normal people may not be bothered by a small amount of chlorine or bleach, those people with asthma or infected with RSV could be vulnerable to lung damage if they have to face exposure to chlorine or another oxidant gas," he said. (Photo courtesy of Steve McCaw) 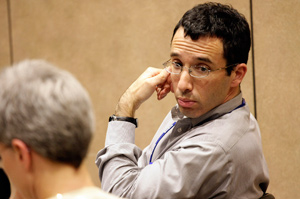 Michael Fessler, M.D., NIEHS principal investigator of the Host Defense Group in the Laboratory of Respiratory Biology and of the Environmental Innate Immunity Group of the Clinical Research Program listened carefully to one of the questions at the end of the seminar. He studies lung inflammation and host defense in mouse models and the role of innate immunity in inflammatory lung disease in humans. (Photo courtesy of Steve McCaw)

"We used to think that respiratory syncytial virus (RSV) is a cause of runny nose and occurs mainly in children," said NIEHS grantee Sadis Matalon, Ph.D., during his May 25 guest lecture at NIEHS. "It has become very clear recently that RSV is very much undiagnosed and accounts for a large part of the adult pneumonias of unknown cause."

Matalon discussed the basic mechanisms and physiological consequences of RSV. In his seminar titled "Respiratory Syncytial Virus: From Runny Noses to Pulmonary Edema," he also talked about his research on RSV and oxidant gas exposure interactions, part of his contributions to the NIH CounterAct Program.

Matalon is the Alice McNeal professor and vice chairman for Research in the Department of Anesthesiology and director of the Pulmonary Injury and Repair Center in the School of Medicine at University of Alabama at Birmingham (UAB).

According to Matalon, RSV can cause serious illness, creating a significant burden on the healthcare system. "RSV is the most common reason that children become hospitalized," Matalon said. Since the body does not develop permanent resistance to RSV, repeated infections occur and adults are not immune. "There are approximately 170,000 hospitalizations and 10,000 deaths associated with RSV annually in people over 65 years of age in the U.S. alone," he continued.

Matalon described how RSV infection in mice decreases the ion transport across the epithelial cells lining the lungs. These cells, called alveolar cells, line the alveoli -- the tiny air sacs of the lung where the exchange of oxygen and carbon dioxide take place.

The alveolar cells separate the air compartment inside the lung and the interstitial space next to the pulmonary blood vessels. A thin layer of liquid is required on the apical, the air-facing side of the alveolar epithelium, in order to permit efficient lung and blood gas exchange. Too much liquid prevents adequate gas exchange and not enough oxygen gets to the cells causing hypoxia. Pulmonary edema occurs when there is too much fluid in the lungs.

Normally, fluid is reabsorbed from the air space into the interstitial space across the alveolar cell to prevent fluid build-up -- a process called alveolar fluid clearance (AFC). Sodium and chloride ions pass through ion channels located on the apical alveolar epithelium and water passively follows. The epithelial sodium channels (ENaC) are responsible for this apical sodium movement. On the blood side of the alveolar cell, the sodium-potassium adenosine triphosphate dependent pump (Na,K-ATPase), an ion transporter, pumps sodium out of the cell into the interstitial space.

Understanding these mechanisms, Matalon explained, may lead to the discovery of interventions that can be effective in treating patients who develop RSV through general environmental exposures or as a result of industrial accidents, natural disasters, or terrorist attacks.

(Laura Hall is a biologist in the NIEHS Laboratory of Toxicology and Pharmacology currently on detail as a writer for the Environmental Factor.)

Translating Basic Research on RSV to Treatment with CounterAct Funding

Matalon's studies showed that mice that were infected with RSV and exposed to chlorine gas developed reactive airway disease syndrome - a disease restricting airflow similar to a persistent asthma syndrome in people who have experienced high irritant exposure. RSV infection alone did not cause the disease, but did sensitize the airways and helped predispose the animals to the development of reactive airway disease after a subsequent exposure to chlorine.

The studies demonstrated that giving exposed animals a long-acting beta2-adrenergic receptor agonist -- a drug that opens airways -- 10 minutes after exposure could reduce disease symptoms and that repeated doses could prevent symptoms for at least six days.