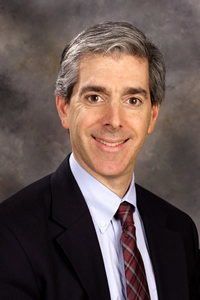 As the new senior advisor for public health, Balbus will take the NIEHS lead on the issue of climate change and its impact on human health. (Photo courtesy of Steve McCaw)

NIEHS recently announced the appointment of John Balbus, M.D., as the Institute's senior advisor for public health. Assigned to the NIEHS Bethesda office, he will act as a liaison to those with an interest or involvement in the many aspects of the NIEHS mission - external constituencies, stakeholders, and advocacy groups. Balbus began his new position at NIEHS on Dec. 7.

"I am pleased to welcome John to our NIEHS team," said NIEHS/NTP Director Linda Birnbaum, Ph.D. "His wealth of experience in public health from environmental health research to service on federal advisory boards makes him a great advocate for NIEHS who will understand the concerns of those outside our Institute."

Balbus is well suited to represent NIEHS. His long-standing interest in and numerous research papers on air and water pollution, nanotechnology, lead and mercury exposure, asthma, toxicogenomics, and climate change mesh well with the mission and research of NIEHS.

His education and experience make him well fitted to the role of advisor and liaison. Balbus is board-certified in Internal Medicine and Occupational Medicine. As an associate professor at the George Washington University School of Public Health, he founded the Center for Risk Science and Public Health, practiced clinical occupational and environmental medicine, and was involved with public health education.

He has served as a member of several federal advisory committees, including EPA's Science Advisory Board and Children's Health Protection Advisory Committee and the National Academy of Sciences Board on Environmental Studies and Toxicology. He continues to serve on the Institute of Medicine Roundtable on Environmental Health Sciences, Research, and Medicine and as chair of the Monitoring and Surveillance work group for the National Conversation on Public Health and Chemical Exposures.

(Laura Hall is a biologist in the NIEHS Laboratory of Pharmacology currently on detail as a writer for the Environmental Factor.)