Miller Confronts the Lessons of Asbestos in Libby, Mont. 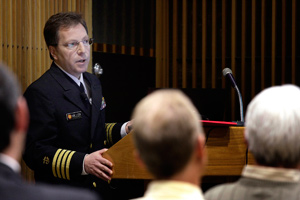 "I've been with several different agencies, and they've certainly colored my world perspective," Miller said of his experiences with the Libby saga, Hurricane Katrina, the anthrax attacks, the attack on the World Trade Center, and other emergencies. (Photo courtesy of Steve McCaw) 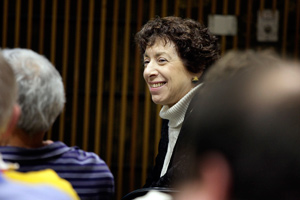 Birnbaum, center, recalled her work with Miller at Libby and said she was "delighted" to host his talk at NIEHS. (Photo courtesy of Steve McCaw) 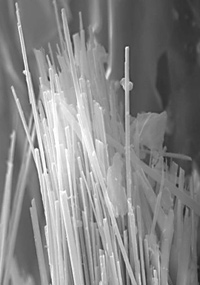 What appears to the eye as a single fiber, when viewed through an optical microscope, as required by current regulations, turns out with advanced magnification - as seen here - to be a multitude of potentially harmful and highly respirable fibers. (Photo courtesy of Aubrey Miller) 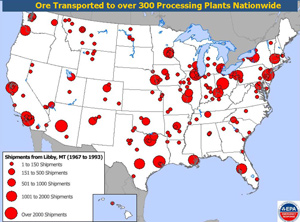 Miller used this map showing the distribution of asbestos contaminated vermiculite to processing plants across the United States to underscore his argument that "Libby's not just a Libby problem." (Photo courtesy of Aubrey Miller)

A capacity audience was on hand at NIEHS Jan. 22 as guest lecturer Aubrey Miller, M.D., spoke on "Environmental Health Response: Asbestos and the Libby Saga." Hosted by NIEHS/NTP Director Linda Birnbaum, Ph.D., Miller's talk presented a narrative of the ongoing public health emergency response in Libby, Mont., and outlined some of the lessons regulators and scientists should learn from the experience.

An environmental epidemiologist and a captain in the U.S. Public Health Service board-certified in occupational medicine, Miller currently serves as the chief medical officer in the U.S. Food and Drug Administration (FDA) Office of the Commissioner's Office of Counterterrorism and Emerging Threats. Previously, he worked for the U.S. Environmental Protection Agency (EPA) and for the U.S. Department of Health and Human Services (DHHS) as a regional health administrator, coordinating multi-agency emergency responses, such as the Libby situation.

The Libby saga began with a newspaper story published in November 1999, and "ten years later, it's still going on," Miller explained. "It's the worst site in EPA history in terms of human health." It has been a source of two of the largest environmental civil and criminal cases, he said, and "it has affected asbestos analysis, methods, and regulations across the country in many ways." The public health emergency in Libby has also given regulators and scientists reason to ponder its lessons for current and emerging environmental threats.

"Even though asbestos has been studied for 100 years," he added, "the science and regulations were developed from worker studies for workplace settings and thus were not very useful for environmental situations and non-worker exposures." Disagreements concerning what minerals should be categorized as asbestos and the determination of "what we should actually be measuring in terms of human exposure" continue to be ongoing public health concerns.

As serious as asbestos exposure has been for workers, even more disturbing to Miller are the risks associated with environmental exposures in the Libby community and elsewhere, as large numbers of non-workers have been identified with asbestos-related disease. Asbestos-contaminated vermiculite was used as attic insulation in over 25 million U.S. homes and contaminated vermiculite was processed in 240 sites across the U.S., where hazardous material was frequently taken and used for landscapes and gardens, driveways, playgrounds, and other purposes.

Lessons for environmental health responses in the future

Politics and financial interests further complicate the regulation of such environmental hazards as Libby's. For instance, there was ample evidence accruing for many years that environmental asbestos contamination was hazardous and that the Libby situation was "a predictable surprise." Based on his experiences Miller is convinced that "there must be other Libbys occurring under our noses" in the U.S. Miller stated we need to challenge dogma and preconceptions about environmental exposures and who is at risk in order to identify disease and provide honest and useful solutions for our communities.