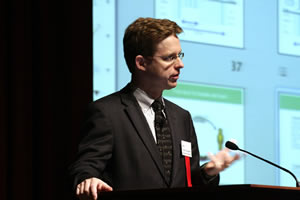 Graubert referred to the famous quote by naturalist Ernst Haeckel when he noted the potential evolutionary role of genomic restructuring. "CNV profile recapitulates phylogeny," he told the audience.
(Photo courtesy of Steve McCaw) 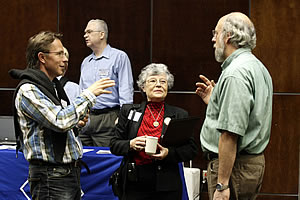 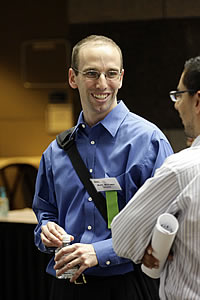 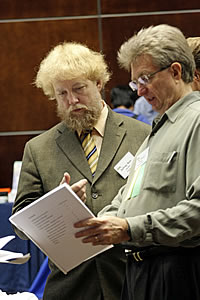 Ross, left, and French took a working break as they discussed the agenda and the abstracts for posters on display. (Photo courtesy of Steve McCaw) 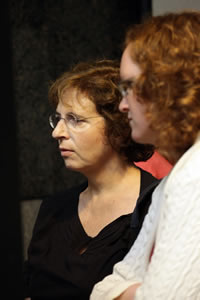 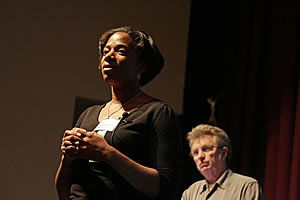 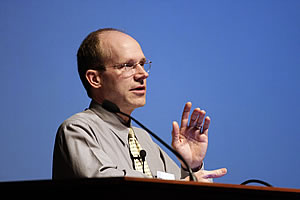 Although genome-wide screening has become increasingly sophisticated and more affordable, Evans, above, argued that most of the "information is [still] so lacking in robustness that it is of questionable utility" in personal medicine.
(Photo courtesy of Steve McCaw)

The Genetics and Environmental Mutagenesis Society (GEMS) celebrated the anniversary of its annual meeting series October 5 at the William and Ida Friday Center on "Dissecting Genome Structure, Genetic Traits and the Basis for Complex Diseases." Along with invited speakers, the daylong meeting featured oral and poster presentations by students and trainees ( see text box (https://factor.niehs.nih.gov/2009/november/science-gems.cfm#bluebox)). As it has since 1982, GEMS received what organizers described as "generous support" for the meeting from NIEHS and several corporate sponsors.

Organized by NIEHS toxicologist and GEMS President-elect John E. French, Ph.D. as a sequential series of lectures on the role of genome restructuring in complex disease, the 2009 series at the Spring meeting (https://factor.niehs.nih.gov/2009/may/gems.cfm) began in April with a talk by NIEHS Principal Investigator Michael Resnick, Ph.D. on the effects of DNA double-strand breaks in reshaping the yeast genome. It concluded with the final lecture of the Fall meeting on the applications of genomic analysis in the clinical setting and the growth of low-cost commercial genomic sequencing.

, of the Washington University School of Medicine in St. Louis. Graubert's interest in the molecular pathogenesis of myeloid leukemia led him to explore the influence of changes made during DNA replication on genetic susceptibility to disease, progression of disease and drug response.

According to Graubert, recent research has clearly established that "widespread copy number variation occurs [even] in apparently healthy individuals... [and that] copy number variation exceeds that of single nucleotide polymorphisms (SNPs) in the human genome" - with CNVs making up an estimated 12 percent of the human genome as compared to the approximately one-tenth of one percent contribution by SNPs. As he looked ahead, Graubert noted how much is not yet understood about the link between CNV and disease.

, next explored the topic of "The Influence of Genome Structure on Gene Expression." Reymond began by observing that scientists have been aware of CNVs and "genomic disorder" since at least 1975, but until the development of advanced bioinformatics and hybridization-based methods for mapping CNVs, they weren't able to establish how widespread structural variation is in the mammalian genome.

Reymond's studies of CNV influence on gene expression have helped to identify variation by tissue and levels of expression, as well as establish that the effects on gene expression change during development. He has explored the effects of the interphase nuclear position of chromosomes and genes on changes in CNV and established that there is more variation in some organs than in others. He speculates that high levels of CNV, while important in disease, may also benefit an organism by contributing to survival and adaptation.

, spoke on "Personal Medicine and Genomics: Too Much Information/Too Little Information - A Clinical Perspective." Throughout his talk, Evans explored the irony inherent in his title. As a geneticist, Evans is excited by the promise of genome-wide screening, but as a clinician he has yet to see its "added value" for the treatment of disease.

When he turned to commercial genomic screening, Evans questioned the utility of information currently available and the ways it is being marketed to consumers. He pointed to medical and ethical concerns about the "$1,000 genome" and the interpretational Pandora's box that such screening will inevitably open. 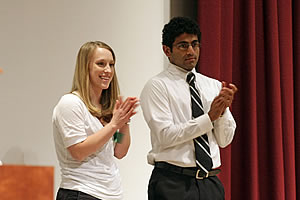 On stage for awards at the end of the day, poster winners Amanda Smith, left, and Raju Prasad, Ph.D., applauded the winners of the oral presentation competition. (Photo courtesy of Steve McCaw) 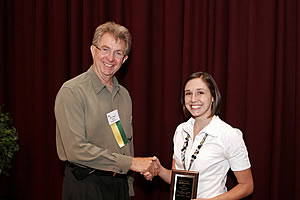 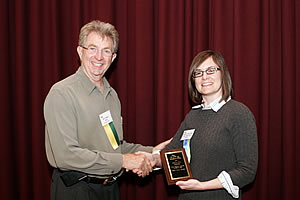 Spotlight on Students and Trainees

During oral and poster competition sessions at its Fall meeting, GEMS gave students and trainees an opportunity to share their own research findings. Not surprisingly, NIEHS trainees and senior scientists were well represented, and many of the presentations meshed with the meeting's theme, "Dissecting Genome Structure, Genetic Traits, and the Basis for Complex Diseases."

The winners received cash awards that are typically used for professional development. In its 27 years of nurturing young scientists, GEMS has used support from NIEHS and other sponsors to make a total of more than $50,000 in awards to students and trainees who have gone on to make names for themselves in their fields.


"Call for Nominations to the Interagency..." - previous story