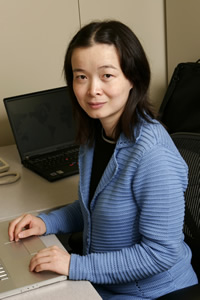 Li heads a group in the NIEHS Laboratory of Signal Transduction that is striving to characterize molecular mechanisms that may hold the secrets of longer life and healthier aging. (Photo courtesy of Steve McCaw) 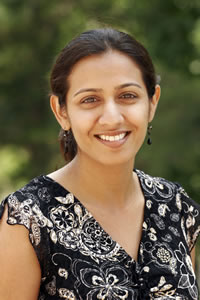 Visiting Postdoctoral Fellow Aparna Purushotham, Ph.D., was lead author on the paper. Li said of her colleague, "She has done a great job on this study and deserves recognition [for her important contributions]." (Photo courtesy of Steve McCaw)

A new study conducted by researchers at NIEHS suggests that nuclear protein SIRT1 regulates fat metabolism in liver. SIRT1 belongs to the family of proteins named sirtuins that extend the life span of yeast, C. elegans, and Drosophila in response to caloric restriction. As worldwide epidemics of obesity and diabetes threaten metabolic health and increase the incidence of liver damage, SIRT1 presents a new pharmacological target for treating hepatic disease. This study was published in the April 2009 issue of the prestigious scientific journal Cell Metabolism.

The principal investigator of the study, Xiaoling Li, Ph.D., is the head of the Mammalian Aging Group at NIEHS, whose members all contributed as co-authors on the study. A native of China, Li received her Ph.D. in biological chemistry from the Johns Hopkins University School of Medicine and trained as a postdoctoral fellow at the Massachusetts Institute of Technology before joining NIEHS in 2007. She studies environmental, nutritional and hormonal factors that affect sirtuins - regulators of aging and longevity.

In her recent publication (https://www.ncbi.nlm.nih.gov/pubmed/19356714?ordinalpos=1&itool=EntrezSystem2.PEntrez.Pubmed.Pubmed_ResultsPanel.Pubmed_DefaultReportPanel.Pubmed_RVDocSum)

, Li utilizes knockout mice with hepatic deletion of SIRT1 to study liver function in search of regulators of lipid metabolism. SIRT1 is an enzyme that deacetylates histones - the structural components of chromosomes - and modulates their function. SIRT1 activity is dependent on the nutritional status of the cell and therefore can serve as a direct link between metabolism and chromosome structure. It translates what we eat into gene modification.

In previous studies, mice with whole body SIRT1 knockout suffered from physiological abnormalities and severe growth retardation that concealed the importance of SIRT1 in regulating liver function. This is one of the first studies using liver specific knockout mice to outline the molecular mechanism of SIRT1 function in liver and fat metabolism.

After extensive biochemical analysis, Li's team determined that SIRT1 interacts with and regulates a lipid sensor called the peroxisome proliferators-activated receptor alpha (PPARα). PPARα signaling is responsible for normal synthesis and elimination of lipids and fat. A coactivator of PPARα, PGC-1α, is also a SIRT1 substrate, and its activity is stimulated following deacetylation by SIRT1. The researchers examined 48 genes that are regulated by PPARα, and found that 25 genes had decreased expression, indicating an impaired PPARα signaling and fatty acid metabolism.

A healthy liver may contain up to 10 percent of its weight in fat. However, abnormal retention of fat and lipids within the liver can lead to inflammation and scarring of liver - a condition known as cirrhosis. If untreated, cirrhosis results in liver failure and death.

(Negin Martin, Ph.D., is a research fellow in the NIEHS Membrane Signaling Group. She was recently chosen as a 2009 Science Communication Fellow with Environmental Health Sciences.)