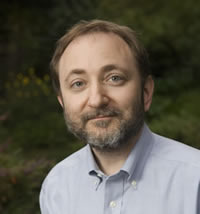 is a molecular biologist and professor of pathology and genetics at Stanford University. He and Craig Mello, Ph.D., of the University of Massachusetts Medical School shared the 2006 Nobel Prize in Physiology and Medicine (http://med.stanford.edu/special_topics/2006/nobel-ceremony/)

for their discovery of RNA interference (RNAi) - the way double-stranded RNA (dsRNA) can silence gene expression. Thanks to their groundbreaking work, researchers are now able to use RNAi techniques to quickly and randomly silence one gene at a time and identify even previously unknown genes involved in a specific pathway.

Fire's current research focuses on the role of RNAi and other triggers and mechanisms that help an organism's immune system identify and respond to foreign or unwanted nucleic acid. His lab primarily uses the nematode C. elegans as a model system to study the role of dsRNA, which is an essential component of most viruses, as a major mediator in gene silencing. Fire's lab is particularly interested in the roles of gene silencing processes in viral pathogenesis and tumor progression in mammalian systems.