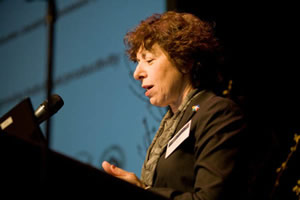 Birnbaum reminded her audience that mixtures pose dangers that may not be completely understood. “Some chemicals may act in an additive fashion,” she said, “When we look one compound at a time, we may miss the boat.” (Photo by Streetfly Studio/J.R. Carvey and courtesy of the CCCEH) 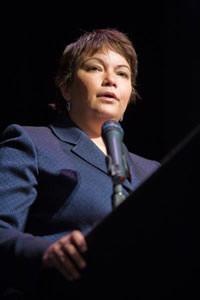 Jackson, above, told attendees, “We are guardians of the things we all value.” Like Birnbaum, she was adamant about the importance of federal partnerships in children's environmental health. “EPA is an advocate for the people, and we are back on the job.” (Photo by Streetfly Studio/J.R. Carvey and courtesy of the CCCEH) 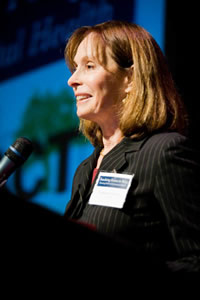 Frederica Perera, Dr.P.H., director of the CCCEH, was both a host and presenter. Birnbaum referred to her recent study of gene expression and asthma in the children of mothers exposed to diesel exhaust during their pregnancies. (Photo by Streetfly Studio/J.R. Carvey and courtesy of the CCCEH) 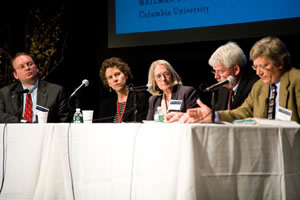 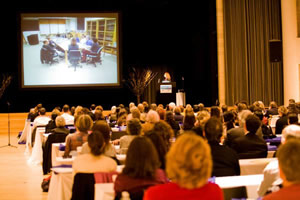 Alfred Lerner Hall at Columbia, where the meeting took place, was filled to capacity with an estimated 400 scientists, community members, policymakers and advocates for effective science-based policy on children's environmental health. (Photo by Streetfly Studio/J.R. Carvey and courtesy of the CCCEH)

During her keynote address at a children's environmental health meeting March 30 at Columbia University, NIEHS Director Linda Birnbaum, Ph.D., took advantage of her time at the podium to reinforce the Institute's commitment to the Children's Centers program and highlight the range of other NIEHS research related to promoting children's environmental health. She followed a keynote talk in the morning session by Lisa Jackson, newly appointed head of the U.S. Environmental Protection Agency (EPA), co-sponsor with NIEHS of the Children's Centers.

Birnbaum spoke to an audience that included a number of NIEHS grantees and partners at the meeting, which was organized around the theme of “Translating Science to Policy: Protecting Children's Environmental Health.”. The daylong event focused on three major environmental health concerns affecting children in urban areas — air pollution from fossil fuel combustion, residential pesticides, and endocrine-disrupting chemicals found in common consumer products. The meeting was co-hosted by two NIEHS grantees — the Columbia Center for Children's Environmental Health (CCCEH) (https://www.publichealth.columbia.edu/research/columbia-center-childrens-environmental-health)

and WE ACT for Environmental Justice (http://www.weact.org/)

Birnbaum's talk, “The Promise of Children's Health,” began with what she described as “a children's success story” in the battle to reduce lead exposures. As a consequence of legislation in the 1970s and volumes of research since — much of it supported by NIEHS — blood lead levels in children have dropped dramatically, she said, from a median level of 25 micrograms per deciliter in 1976-1980 to one-tenth that amount in 1999-2000. Birnbaum cautioned, however, that “there is no safe level of lead” and that efforts to protect children completely from exposure must continue.

As a veteran EPA scientist and NIEHS director, Birnbaum spoke adamantly about the contributions of the federal partnership-supported Centers for Children's Environmental Health and Disease Prevention Research. Researchers in this program, she explained, have raised public awareness of the hazards posed by asthma, indoor pollution and vehicle exhaust on the respiratory health of children, both directly and, in recent work (https://factor.niehs.nih.gov/2009/april/study-links.cfm), indirectly through intrauterine exposures to air pollution that trigger epigenetic alterations in infants' gene expression.

This recent work by the CCCEH researchers provided a transition for Birnbaum as she moved into related research exploring the “Barker hypothesis” on the latent effects of early exposures in utero or during infancy. This research includes studies at four Breast Cancer and the Environment Research Centers, supported by another federal partnership between NIEHS and the National Cancer Institute.

In addition to investigations of children's neurodegenerative disorders ongoing at the Children's Centers, Birnbaum continued, NIEHS partners with other funding sources to support an aggressive research agenda into autism spectrum disorders (ASD). The Institute serves on the Department of Health and Human Services Interagency Autism Coordinating Committee, which has set the direction for American Recovery and Reinvestment Act stimulus funding for ASD research.

Birnbaum, who has research interests herself in endocrine disruption, discussed several highlights of NIEHS-sponsored investigations into bisphenol A and other estrogen-mimicking compounds suspected of interfering with normal development and reproductive function. Along with the National Toxicology Program, which oversees the Center for the Evaluation of Risks to Human Reproduction, NIEHS has been at the leading edge of strengthening the science base of toxicology and risk assessment.

Throughout her talk, Birnbaum underscored the accomplishments and potential of work supported by NIEHS, while emphasizing how much work lies ahead. She called children's health “a report card on adults.” She closed by admonishing the audience to join NIEHS in striving to make sure “our report cards give us, increasingly, A's.”