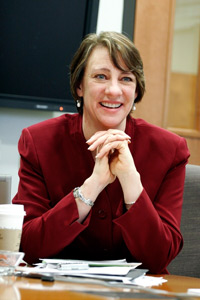 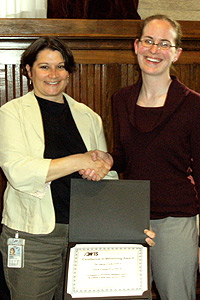 Cohen-Fix, left, posed with Arnold and the award certificate. Arnold is an investigator at the National Institute of Allergy and Infectious Diseases. (Photo courtesy of the Bethesda Chapter of AWIS)

NIEHS Associate Director Sharon Hrynkow was one of two NIH women scientists honored by the Bethesda chapter of the Association for Women in Science (AWIS) with the organization's annual Award for Excellence in Mentoring. During the May 13 AWIS Mentoring Workshop at the Cloisters on the NIH campus in Bethesda, Md., AWIS board member Michelle Arnold. Ph.D., presented Hrynkow and Orna Cohen-Fix, Ph.D., with certificates of appreciation.

Arnold cited Hrynkow's efforts since 2000 on behalf of junior scientists, during her tenure as deputy director and acting director of the Fogarty International Center and in her current role as NIEHS associate director assigned to the Institute's office in Bethesda. Arnold pointed to new programs (https://factor.niehs.nih.gov/2008/october/virtualenvironmentaltraining.cfm) created by Hrynkow "to support and mentor scientists in resource-limited nations and novel approaches to supporting U.S. undergraduates and graduate students in global health." She also noted Hrynkow's keynote address on the important role of women in taking the lead to save the planet at this year's NIH celebration of Women's History Month (https://factor.niehs.nih.gov/2009/april/women-bethesda.cfm).

Hrynkow has been vocal in her support of women and young scientists in talks and programs at NIEHS as well. In 2008, she was the chair of the planning committee for the NIEHS Women's History Month celebration, which included a special International Women's Day panel discussion (https://factor.niehs.nih.gov/2008/april/womens.cfm) by NIEHS scientists and a series of invited lectures by outstanding women scientists. In December 2007, shortly after her appointment as an NIEHS associate director, Hrynkow gave a Frontiers of Environmental Sciences Lecture Series presentation titled "A Conversation on Gender, Equity and Environmental Health."

A principal investigator at the National Institute of Diabetes and Digestive and Kidney Diseases, Cohen-Fix is the co-director of the Johns Hopkins University/NIH Graduate Partnership Program and a past member of the Howard Hughes Medical Institute (HHMI)/NIH Research Scholars Program committee. She also served on the NIH Status of Intramural Women Scientists task force. Arnold praised Cohen-Fix for "her enthusiastic mentoring of the trainees in her laboratory" and her ability to balance "excellent research, editorial work and intramural NIH activities with a full family life."

Since the Bethesda Chapter of AWIS (http://www.awisbethesda.org)

was formed in 1991, its membership has grown to more than 150 women in science. Its members are actively engaged in scientific research, education, administration and policy activities and are employed in federal agencies, academia, business and non-profit organizations. The chapter enjoys generous support from the NIH Office of Research on Women's Health, Office of Community Liaison and National Library of Medicine.