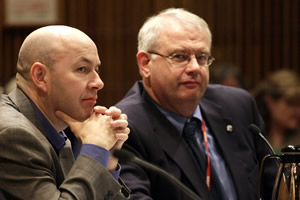 Foster, center, set the stage for the Board's input when he conceded, "We understood that it wasn't going to be as straight-forward as taking them [cancer study criteria] and dropping them into this [non-cancer] template and making them work." He is shown with NTP Deputy Program Director for Science Nigel Walker, Ph.D. (Photo courtesy of Steve McCaw) 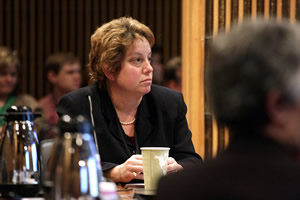 Germolec, above, noted, "The NTP uses functional and quantitative measures of the immune response, so that we can evaluate the biological plausibility of the changes that we observe in our studies." (Photo courtesy of Steve McCaw) 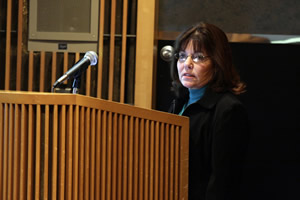 Kerkvliet, above, said her immunotoxicology CWG was gratified at the level of agreement that members reached independently when applying the proposed criteria to several earlier studies. (Photo courtesy of Steve McCaw) 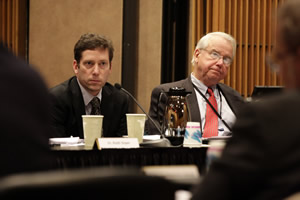 Carney, left, pondered the comments of Board members about his presentations of findings of the reproductive and developmental CWGs. To his left sat ad hoc member and North Carolina State University zoologist John Vandenbergh, Ph.D. (Photo courtesy of Steve McCaw) 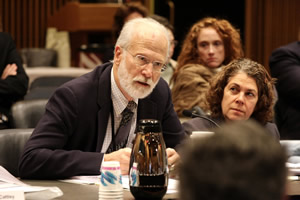 Board member David Wegman, M.D., center, said that NTP was going "in the right direction" and acknowledged that the innovative criteria were "a work in progress." Wegman is a professor and former dean of the School of Health and the Environment at the University of Massachusetts Lowell. Member and University of Michigan geneticist Diane Robins, Ph.D., right, listened intently. (Photo courtesy of Steve McCaw)

The National Toxicology Program (NTP) is trying to bring the same rigorous standards it uses for classifying the outcomes of its cancer studies to many of its non-cancer studies, according to presentations made by speakers at the NTP Board of Scientific Counselors (BSC) meeting November 20 in Rodbell Auditorium. The Board voted to accept three working group reports addressing the establishment of new criteria for future NTP immunotoxicology, reproductive and developmental studies.

The three sets of criteria were presented by BSC Criteria Working Group (CWG) chairs Nancy Kerkvliet, Ph.D., who chaired the immunotoxicology group, and Edward Carney, Ph.D., who chaired the reproductive and developmental groups. The criteria are similar to those used with the agency's gold-standard cancer studies, which are based on five levels of evidence ranging from clear evidence to no evidence and inadequate study.

Toxicology Branch Acting Chief and reproduction and development discipline leader Paul Foster, Ph.D., opened the discussion by explaining why NTP decided to establish the strength of evidence criteria. "We've had a goal now for the best part of 18 months to employ the same rigorous standards used historically to review our carcinogenicity bioassays with the NTP non-cancer studies," he said. He also noted that the NTP did not undertake this effort in isolation and emphasized the critical role the working groups played in helping establish the criteria for the various studies. The working groups, made up of representatives from government, industry and academia, met in late summer 2008.

"We have a desire to have uniform [non-cancer] criteria for chemicals across studies and for studies across chemicals, much as we have for the cancer bioassays," Foster continued, "so that the Board, the NTP staff and the public can have some kind of consistency in the ways these findings are reported."

Foster and Toxicology Branch immunology discipline leader Dori Germolec, Ph.D. (https://www.niehs.nih.gov/research/atniehs/labs/tob/staff/germolec/index.cfm), expressed their confidence that the new criteria will give NTP non-cancer studies the same rigor, consistency and authority that NTP cancer reports have enjoyed for decades. The criteria, they maintained, will increase the utility of the non-cancer studies for regulatory agencies by clarifying the official government opinion of the hazards posed by chemicals.

Following presentations by the chairs of the three CWGs, Board members engaged in a lively discussion before giving NTP the go-ahead to progress to the next phase of finalizing the criteria. NTP scientists agreed to address Board concerns about terminology that might lead to misinterpretation by those not as familiar with toxicology.

In the course of the Board's discussion, Foster, Germolec and NTP Associate Director John Bucher, Ph.D., emphasized that the non-cancer studies will be clearly presented as hazard studies with multiple interrelated end points and not as risk assessments, which require exposure data not always available for non-cancer studies. The levels of evidence, they assured the Board, will be noted as applying under the conditions of the individual study in regard to specific sexes of specific species for the particular studies.

All CWGs proposed four levels of evidence: clear evidence, some evidence, equivocal evidence and no evidence. The reproductive and developmental toxicity CWG also included the category "inadequate study" for studies with qualitative or quantitative limitations that could not be interpreted for toxicity - a category that will also be incorporated into the final immunotoxicology criteria. 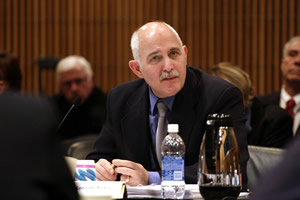 According to Foster and Germolec, revisions to the levels of evidence statements for the three sets of criteria incorporating the Board's recommendations should be completed by the end of January 2009.

The proposed criteria are slated for formal presentation to attendees at the Society for Toxicology (SOT) 48th Annual Meeting and ToxExpo (http://www.toxicology.org/pubs/docs/Prog/2009Prelim.pdf)

March 15-19 in Baltimore by Foster and Germolec.

Germolec expects to begin applying the immunotoxicology criteria to studies for peer review by the end of 2009. Foster said that the first reproductive and developmental studies featuring the new criteria could appear as early as early as 2010.