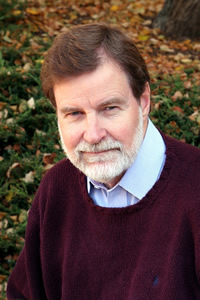 Along with his considerable leadership responsibilities, AAAS Fellow Wilson, above, has maintained an aggressive research agenda. (Photo courtesy of Steve McCaw) 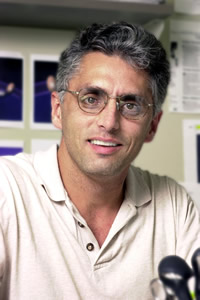 In December, the American Association for the Advancement of Science (AAAS) announced that two NIEHS scientists are among the 486 AAAS 2008 Fellows, an honor bestowed upon AAAS members by their peers. According to AAAS, NIEHS Acting Director Sam Wilson, M.D., and Principal Investigator Jerry Yakel, Ph.D., were awarded this honor in recognition of their "distinguished efforts to advance science or its applications."

The AAAS 2008 Fellows will be presented with an official certificate and a gold and blue rosette pin, representing science and engineering, respectively, on February 14 at the AAAS Fellows Forum during the 2009 AAAS Annual Meeting (http://www.aaas.org/meetings/)

in Chicago. This year's AAAS Fellows were announced in the AAAS News and Notes section of the journal Science (http://www.sciencemag.org/)

Wilson was selected by the AAAS Section on Biological Sciences for his "seminal contribution to the understanding of structure-function relationships of the mammalian repair DNA polymerase, elucidation of its protective role against alkylating agents and for leadership in academia." In addition to serving as acting director, Wilson is the principal investigator in the Laboratory of Structural Biology and head of the DNA Repair and Nucleic Acid Enzymology Group in the Laboratory of Structural Biology.

Yakel was selected by the AAAS Section on Medical Sciences for his "distinguished contributions to neuroscience, particularly the role of nicotine receptors in brain function, and for his efforts in mentoring the next generation of biomedical scientists." A member of the Laboratory of Neurobiology, Yakel is head of the Ion Channel Physiology Group.

The tradition of AAAS Fellows began in 1874. Currently, members can be considered for the rank of Fellow if nominated by one of the steering groups of the Association's 24 sections, by any three Fellows who are current AAAS members - so long as two of the three sponsors are not affiliated with the nominee's institution - or by the AAAS chief executive officer.

Each steering group then reviews the nominations of individuals within its respective section and a final list is forwarded to the AAAS Council, which votes on the aggregate list.

The Council is the policymaking body of the Association, chaired by the AAAS president and consisting of the members of the board of directors, the retiring section chairs, delegates from each electorate and each regional division, and two delegates from the National Association of Academies of Science.