2008 ONES Awardees Speak at NIEHS 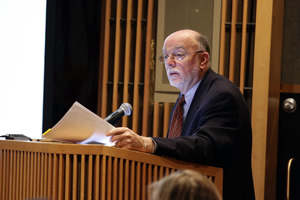 Suk described NIEHS as "an enabling institute..., one of the most public-health oriented of all the institutes at NIH." (Photo courtesy of Steve McCaw) 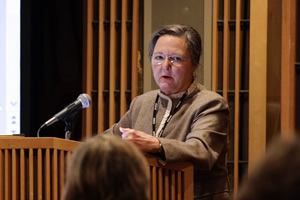 "One of things that we found was that a lot of people who were successful in getting their first grant had trouble getting the renewal of the grant because, during this first phase of their career, they didn't have access either to additional equipment or career enhancement opportunities," Shreffler told the audience. (Photo courtesy of Steve McCaw) 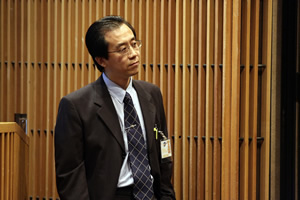 Pi tackled questions from the audience about the paradox inherent in his findings about arsenic - that exposure triggers the induction of antioxidant enzymes to protect cells from reactive oxygen species and at the same time appears to impede glucose-mediated oxidative stress that promotes insulin secretion. (Photo courtesy of Steve McCaw) 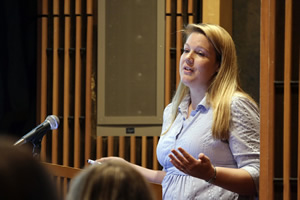 Stapleton plans to enroll 100 children in her study to assess their exposures to PBDEs and their thyroid hormone levels. She plans to combine her field work with lab work to assess the metabolism of PBDEs in human liver and brain cells. (Photo courtesy of Steve McCaw)

Slitt's research is concerned with two aspects of nutrition - the relationship of caloric restriction to longevity, and how body mass impacts the ability of the liver to transport heavy metals and endocrine disruptors. (Photo courtesy of Steve McCaw) 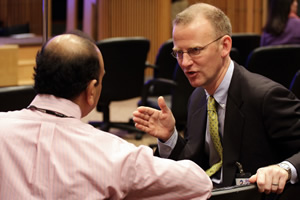 The 2008 winners of the Outstanding New Environmental Scientists (ONES) awards gathered in Rodbell Auditorium December 11 for their first group visit to NIEHS and presentations to Institute scientists. The young investigators were welcomed by NIEHS Acting Deputy Director Bill Suk, Ph.D., who described the event as "a proud day for DERT [Division of Extramural Research and Training]." Suk also called attention to incoming NIEHS Director Linda Birnbaum, Ph.D., who was in the audience.

The ONES winners are a diverse group, with specialized research interests in epidemiology, toxicology, biology and chemistry, who share a common goal of establishing themselves as independent principal investigators. Their research ranges across what Suk described as the NIEHS "rainbow" from fundamental research in molecular toxicology to the application of their findings for the prevention and treatment of disease.

In her opening remarks, ONES Program Director and meeting chair Carol Shreffler, Ph.D., explained that the ONES grants are R01 awards specially designed to help junior investigators at the start of their careers "put in the foundation for a successful research career." The grants fund five years of research at $250,000 per year and support equipment purchases and career enhancement activities with an additional $150,000 during each of the first two years.

"This award is intended to be highly selective for the most talented scientists," Shreffler continued. "We only allow one application per school within an institution." There are also several other requirements that limit the pool of applicants, such as time since earning a Ph.D., tenure-track status, substantial institutional support, a commitment to spending 80 percent of their time on research, and a rigorous peer review process.

"We indeed have made this a very competitive process," she concluded, "and we look forward to having these awardees make some very seminal contributions to the future of our Institute."

The new ONES winners include six outstanding junior investigators:

The morning presentations were part of a day-long agenda for the awardees that included lunch with DERT staff, and afternoon meetings with intramural scientists and postdoctoral fellows. The ONES awardees will make additional presentations at NIEHS over the course of their grants.