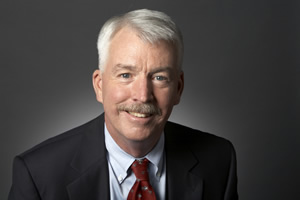 Landrigan, above, described himself as "delighted, almost overwhelmed," to be a part of the groundbreaking National Children's Study. (Photo courtesy of Phil Landrigan and the Mount Sinai School of Medicine)

Following eight years of intensive research and planning on what was described as "a landmark day for a landmark study," on January 13 NIH launched the National Children's Study at sites in North Carolina and New York. The study will be the largest long-term investigation of children's health and development and their links to the environment ever to be conducted in the United States. The Eunice Kennedy Shriver National Institute of Child Health and Human Development (NICHD) (https://www.nichd.nih.gov/)

is the lead NIH institute for the study in partnership with NIEHS.

Authorized by Congress in the Children's Health Act of 2000, the National Children's Study will eventually involve 100,000 families over a 21-year period in 105 counties served by an estimated 40 centers nationwide. Biomedical and environmental samples will be stored at a central repository and, along with clinical and lifestyle questionnaire data, will be analyzed to provide insights into the environmental causes of such conditions as birth defects, premature birth, asthma, diabetes, childhood cancers and autism.

In addition to NICHD and NIEHS, other members of the consortium carrying out the study include the Centers for Disease Control and Prevention (CDC) and the U.S. Environmental Protection Agency (EPA).

, of the University of North Carolina who will be overseeing recruitment in rural, sparsely populated Duplin County, N.C., and NIEHS grantee Phil Landrigan, M.D. (http://www.mountsinai.org/Research/Centers%20Laboratories%20and%20Programs/Child%20Health%20and%20Development%20Institute?citype=Physician&ciid=Landrigan%20Philip%20J%201227952)

, of the Mount Sinai School of Medicine, who will be in charge of activities in the Borough of Queens, N.Y., where residents speak some 105 languages and about half of the 2.2 million person population were born outside the United States.

"Initially, [the study] will provide major insights into disorders of birth and infancy, such as preterm birth and its health consequences," Alexander said in his introduction. "Ultimately it will lead to a greater understanding of adult disorders, many of which are thought to be heavily influenced by early life exposures and events."

During the next 18 months, each of the initial Vanguard Centers will begin recruiting and enrolling approximately 375 women who are pregnant or planning a pregnancy to participate in the study. The study sites and volunteers are being selected as part of a plan to make the study participants representative of the diverse population of the country as a whole. Researchers will collect blood, urine, hair and vaginal swab samples from volunteers, as well as dust, water and air samples from their environments.

During the first two years, contact with participants and their children will include home visits, a visit to the delivery and follow-up telephone interviews. After the third year, participants will receive follow-up visits every three years until the child reaches age 21. There are no current plans to extend the study into adulthood, although webcast participants did not rule out the prospect.