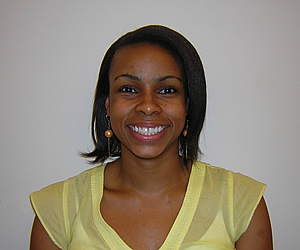 First author Tonya Taylor is a recipient of a National Research Service Award from NIEHS. (Photo courtesy of Tonya Taylor and Emory University) 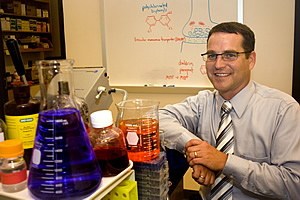 In a new study funded in part by NIEHS and published in the June 24 issue of the Journal of Neuroscience, Emory University scientists unveiled a new mouse model with reduced monoamine storage capacity that manifests the early non-motor symptoms of Parkinson's disease (PD). This engineered mouse model could offer insight into the early symptoms of PD and lead to the discovery of new avenues for early diagnosis and treatment of the disease - a progressive neurodegenerative condition caused by disruption of the dopamine system that devastates one million Americans each year.

Currently, there are no restorative cures or preventive measures available for PD patients. In many cases, early detection and adjunctive treatment can significantly improve quality of life and potentially delay disease progression.

"These mice are very useful for studying the major non-motor symptoms of Parkinson's because they have them together as a package," explained lead investigator Gary Miller, Ph.D. (http://hip.emory.edu/resources/faculty/miller_gary.html)

, in an interview following publication of the study. Miller is an associate professor in the departments of Environmental and Occupational Health in the Rollins School of Public Health and Neurology and Pharmacology in the School of Medicine at Emory University and principal investigator of the NIEHS-funded Parkinson's Disease Collaborative Environmental Research Center at Emory University.

The mouse strain engineered for the study (https://www.ncbi.nlm.nih.gov/pubmed/19553450?ordinalpos=1&itool=EntrezSystem2.PEntrez.Pubmed.Pubmed_ResultsPanel.Pubmed_DefaultReportPanel.Pubmed_RVDocSum)

lacks an integral membrane protein known as vesicular monoamine transporter 2 (VMAT2). Miller and his colleagues developed this mouse model to study how dysfunction of other monoamine system neurotransmitters, such as serotonin and norepinephrine, may contribute to the onset of PD.

VMAT2 transports monoamines - neuronal signal molecules such as dopamine, serotonin and norepinephrine - in a neuron. Absence of this protein led to the reduction of norepinephrine and serotonin levels in all regions of brains in 12- to 15-month old mice that were tested by the investigators. These mice are considered middle-aged to old since the life expectancy of mice is about 24 to 30 months. According to the researchers, the VMAT2 gene in mice is 92% identical to its counterpart gene in humans.

Researchers observed that VMAT2-deficient mice could not discriminate between scents as well as normal mice at an early age and that their olfactory function declined with age. Other distinguishing characteristics of these mice also seen in humans with PD were delayed gastric emptying, altered sleep latency, and anxiety-like and age-dependent depressive behaviors.

Interestingly, all of these characteristics are recognized as early-onset non-motor symptoms of PD in humans. Motor disturbances - tremors, rigidity of movement and lack of balance - appear after 70-80% of striatal dopamine has been lost in PD patients. The non-motor symptoms such as loss of the sense of smell, gastrointestinal abnormalities, sleep disturbances, anxiety and depression appear prior to the onset of movement disorders and are early warning signs of PD.

One of Miller's graduate students in the Molecular and Systems Pharmacology Program at Emory University, Tonya Taylor, was first author on the study, which was co-authored by specialists from several departments in the School of Medicine. Taylor graduated from Duke University in 2005 with a degree in Chemistry. She was named a Neuroscience Scholar by the Society for Neuroscience.

The interdisciplinary research team was supported by NIEHS center and training grants, along with funding from the National Science Foundation and Michael J. Fox Foundation.

(Negin Martin, Ph.D., is a biologist in the NIEHS Laboratory of Neurobiology Viral Vector Core Facility and a 2009 Science Communication Fellow with Environmental Health Sciences. She recently completed a postdoctoral fellowship with the NIEHS Membrane Signaling Group.)