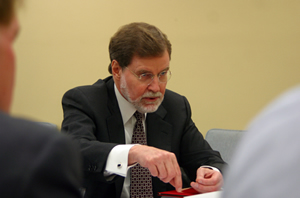 Wilson gestured as he emphasized a point about the new initiatives NIEHS is now pursuing - including research on more sophisticated monitors to measure individual exposures to air pollution. (Photo courtesy of Jon Nalick and USC News) 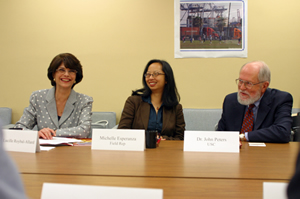 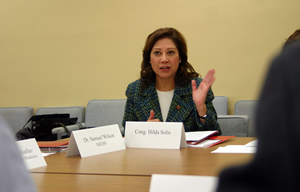 NIEHS Acting Director Samuel Wilson, M.D., traveled to California to meet on May 27 with veteran University of Southern California (USC) grantee John Peters, M.D., Sc.D. and two U. S. Congresswomen, Lucille Roybal-Allard and Hilda Solis. Wilson participated in an information session to brief the representatives about current NIEHS-funded research and new initiatives in the areas of air pollution and children's health.

Peters is the Hastings Professor of Preventive Medicine and director of the Division of Environmental Health at the USC Keck School of Medicine and an NIEHS grantee for more than a decade. Rep. Roybal-Allard and Rep. Solis represent districts that include parts of greater Los Angeles.

The visit was part of an on-going effort by Wilson, NIEHS Acting Deputy Director William Suk, Ph.D., and others in the NIEHS Office of the Director to support grantees and inform stakeholders of the Institute's commitment to basic research in the environmental health sciences, the well-being of the nation's children, environmental justice, community involvement and community-based participatory research. Their travels have taken the emissaries throughout the United States and overseas during the past year, as they have visited grantee institutions, professional meetings, town halls and information sessions.

For the past ten years, Peters has directed the Southern California Environmental Health Sciences Center, an NIEHS-supported center which is based at the USC and includes faculty members from both USC and the neighboring University of California at Los Angeles, where NIEHS also supports research programs. The Center focuses on the full range of environmental health problems that humans face and endeavors to understand more completely how host factors and environmental exposures interact to produce human disease.

Now in her eighth term, Rep. Roybal-Allard is the first Mexican-American woman to serve in Congress and currently sits on the House Appropriations and Standards of Official Conduct committees. She has served as the Chair of the California Democratic Congressional Delegation and the Congressional Hispanic Caucus. She has also been active on the Congressional Children's Caucus, Democratic Homeland Security task force and the livable communities task force.

Rep. Solis, who was elected to her seat in 2000 with 79 percent of the vote, is an advocate for the promotion of environmental justice and for addressing health disparities. Among her other proposals, she has supported legislation to reduce the number of teen pregnancies within the Latina and African-American community.

(Jon Nalick is editor of the USC Health Sciences Campus newsletter HSC weekly, which ran a story about the meeting in its June 6 issue.)