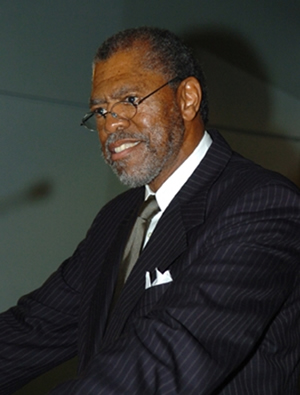 After a successful career as NIEHS Director Emeritus and Principal Investigator, Ken Olden, Ph.D., has left the Institute to set a precedent in public health education with the creation of the new School of Public Health on the Hunter College campus of the City University of New York (CUNY). It will be the first such program designed with an urban focus, and it offers Olden the natural next step in his career in the environmental health sciences.

Hunter College is a senior unit of CUNY, and its location gives Olden an opportunity to pursue several of his public health research interests in a ready-made laboratory literally just outside his door. The city is home to several vigorous environmental justice programs and the kinds of public health issues, such as health disparity, that are especially relevant in urban settings.

In 2006, CUNY Chancellor Matthew Goldstein announced plans to open a School of Public Health at Hunter College by 2010, making it the first public school of public health in New York City. The proposed School of Public Health will offer graduate degree programs and possibly selected undergraduate degree programs with an urban focus in the five core areas of public health - biostatistics, epidemiology, social and behavioral sciences, health care administration and policy, and environmental and occupational health.

Public health, community-based participatory research, children's health and environmental justice were strongly emphasized during Olden's tenure as NIEHS director from 1991 to 2005. In 1994, NIEHS published a strategic plan, Vision for the Future, that set the stage for integrating the Institute's basic research, toxicology, public health and environmental justice initiatives and positioning NIEHS to play an increasingly important role as "public policy makers struggle to balance human health needs with the economic benefits of commercial processes that might endanger that health."

He assumed the position at a time when the Institute had experienced a downturn in the constant dollars of its budget, and within two years he had gained NIH support for increasing the NIEHS share of resources. By working to increase the Institute's visibility and serving as an advocate for increased funding, Olden helped to increase the NIEHS budget more than four-fold over his tenure.

After his retirement as director, Olden continued to pursue his interests in public health while also serving as a principal investigator in the Laboratory of Molecular Carcinogenesis Metastasis Group. After receiving his Ph.D. from Temple University in 1970 and completing postdoctoral work at Harvard Medical School, Olden had joined the National Cancer Institute (NCI) in 1974 where he rose to become a tenured principal investigator in 1977.

When Olden came to NIEHS, he said his goal for NIEHS was to raise the institute's image among key officials of the executive and legislative branches to make the NIEHS more familiar at budget time and a "prime time player in environmental health" nationally and worldwide. His success in accomplishing those goals bodes well for the visionaries at Hunter who chose him to take on this historic public health education challenge during a time of spending constraints.