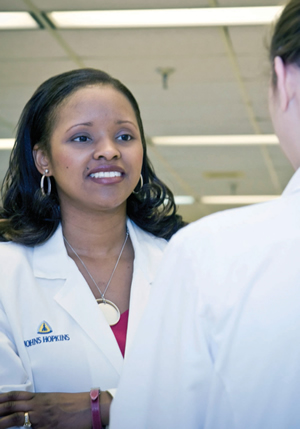 Dr. Crystal Watkins, a Meyerhoff alum who went on to earn a M.D./Ph.D. from Johns Hopkins University, says she and her fellow scholars can be an influential force in changing the face of science. (Image courtesy of Diverse: Issues In Higher Education) 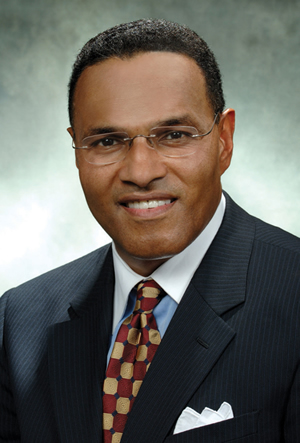 (Editor's note: This story, originally published online in Diverse: Issues In Higher Education 22:47, highlights the successes of a scholarship program which has received ongoing support from the Division of Minority Opportunities in Research [MORE] at NIH/NIEHS.)

Twenty years later, the University of Maryland, Baltimore County's efforts to increase the number of minorities pursuing graduate STEM degrees have become something to study and replicate.

In a sea of bad news concerning the lack of Black male representation on college campuses, an oasis of minority male scholarship exists at the University of Maryland, Baltimore County, through the Meyerhoff Scholarship Program.

Launched in 1988 via the generous philanthropy of real estate entrepreneur Robert Meyerhoff and his wife, Jane, the Meyerhoff program was initially focused on increasing the number of Black males pursing higher education in the fields of science, technology, engineering and math (STEM) but now has been expanded to include women and other underrepresented students.

In April, the Meyerhoff program held a two-day 20th Anniversary Research Symposium and Celebration, bringing back many of the 200 alumni who have completed doctorates, medical degrees and other STEM graduate degrees.

Meyerhoff alum Dr. Kafui Dzirasa, who is on the verge of adding a medical degree to the Ph.D. in neurobiology he's already earned while enrolled in a dual-degree program at Duke University, attended the Meyerhoff 20th anniversary celebration and called it "absolutely amazing, just to see the summation of 20 years. Everyone in the room seemed to be a doctor of some sort. I've never seen anything like it."

Dr. Crystal Watkins, a Meyerhoff alum who went on to earn a M.D./Ph.D. from Johns Hopkins University and recently wrapped up a stint as chief resident in psychiatry at JHU, says she felt "overwhelming emotion" while standing in a room with many of her Meyerhoff colleagues who are already trailblazing scientists and physicians.

"For the alumni it's just amazing because you have so many talented people that are this critical mass. And you're really saying, 'Wow, look at what kind of force we could be in changing the face of science,'" says Watkins, who has accepted an assistant professorship at Hopkins. "When I say the face of science, [I mean] not just the color of the people that are practicing it, but even just the way we teach education and the way we reach out to young people in the inner-city that are interested in being scientists."

The Meyerhoff program is the brainchild of Dr. Freeman A. Hrabowski, UMBC president and a civil rights activist who graduated from Hampton University at age 19 with the highest honors in mathematics. As one of a small cadre of Black men in the United States holding advanced degrees in mathematics and statistics, Hrabowski has a particular passion for guiding young minorities towards STEM doctorates through the Meyerhoff program.

"Our challenge is both socioeconomic and racial. African-American and Hispanic children rarely see examples of successful scientists and engineers looking like themselves, and so people tend to aspire to be like those they admire. And unfortunately, the popular culture doesn't often sing the praises of Black scientists," Hrabowski says.

Noting that 20 Black Meyerhoff alums are completing Ph.D.s or medical degrees this year alone, Hrabowski says a key component of the program's success is buy-in from UMBC research faculty, the majority of whom are White.

"Any institution will have supportive minority staff members, and they are very important, of course," Hrabowski says. However, "it takes researchers to produce researchers, and unfortunately, very few of the scientific researchers in our country are African-American or Hispanic. And so we need Whites to become involved in this work, because the paucity of minority scientists is not simply a minority issue; it is an American issue," he adds.

Meyerhoff alum and University of Maryland Medical Center emergency medicine resident Dr. Adrienne M. McFadden says UMBC staff treat Meyerhoff students like family. For example, when Meyerhoff scholars "get together a few times a semester, they call it a family meeting, so it is all in all considered a family from the beginning to the end," she says.

When meeting other minority graduate students while completing her medical and law degrees at Duke University, McFadden says many of them complained about the lack of a support system at the colleges they attended, which is in stark contrast to the cocoon of support the Meyerhoff program has built for its minority scholars.

Dzirasa says the six-week summer bridge program that all Meyerhoff scholars enroll in after high school is crucial to building a foundation of success for the scholars, many of whom never studied in groups during high school. However, many Meyerhoff scholars find that the group-study concept ingrained within the program and emphasized during the summer bridge is key to successfully tackling the rigorous math and science courses at UMBC.

"For me, I never studied in groups in high school, I never saw the benefit of it," says Dzirasa, who was a chemical engineering major at UMBC. "But then again, I did moderately well, but never achieved up to the level of my potential. From the summer bridge experience, I learned how to start working in groups, and that was something that took my classmates and I all the way through undergrad."

As an example of the effectiveness of the group-study concept, Dzirasa says of the six Meyerhoff scholars that were chemical engineering majors at UMBC, "We had the top six scores in all of our classes because we worked very efficiently together.

"Of those, there are three M.D./Ph.D.s, one Ph.D., one M.D., and one person with a master's in systems engineering from Columbia," Dzirasa adds. "The notion that all of us succeeded together is the idea that drove all of us forward."

McFadden says the Meyerhoff program is "a well-oiled machine," in that Meyerhoff faculty and staff know that many of the high-achieving students coming into the program "tended to do things on our own and excelled on our own." And they know that group-study "is a new concept for many of us, but they encourage us to enter into study groups and find a support system of students who are going to be in our classes so we have them to lean on and help us in our weaknesses in certain subjects."

Annually, Hrabowski says, the Meyerhoff program gets around 2,000 nominations from high school principals, guidance counselors and teachers; and 1,000 applications for 80 Meyerhoff seats at UMBC. Nevertheless, Hrabowski says the concepts of group study and forging relationships with faculty mentors emphasized through Meyerhoff have been replicated among the general population of students at UMBC, and other colleges have taken their cues from Meyerhoff's success. Louisiana State and Cornell universities are just two of the institutions that have modeled programs after Meyerhoff.

Dzirasa recalls a meeting of Meyerhoff students in which they discussed how the success of Meyerhoff could be replicated at other institutions. He says that what "people don't realize is that Dr. Hrabowski is constantly in the process of replicating himself in the people that are coming through the program.

"Even if it's something that may not show in five or six years, going back to the reunion, I'm now seeing my classmates and the people who tutored me who are professors at Michigan, professors at Yale, professors at Harvard, and you see this subtle thing happening, where indeed, he has replicated himself," Dzirasa adds.

Ultimately, McFadden says, Hrabowski's insistence that he get nothing but the best from his Meyerhoff scholars has paid great dividends.

"An underlying theme of great expectations is why Dr. Hrabowski was successful," McFadden says. "If you have great expectations for yourself, then you will rise to the level of great accomplishment. What he always reinforces in all of his Meyerhoffs and in all of the students at UMBC is to expect the best from themselves."

(Reprinted with permission from Diverse: Issues In Higher Education)