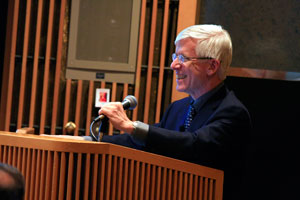 Samet's talk was interspersed with humorous commentary, including his reference to Gibson's law about scientific discourse. "For every Ph.D.," he quipped, "there is an equal and opposite Ph.D." (Photo courtesy of Steve McCaw) 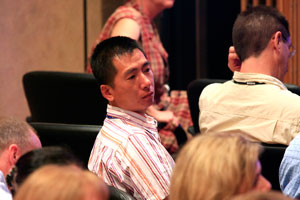 The Epidemiology Branch was well represented in the audience. Shown here is Visiting Fellow Yang Cao, Ph.D., a member of the Pediatric Epidemiology Group. (Photo courtesy of Steve McCaw) 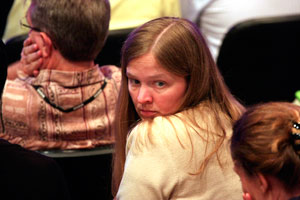 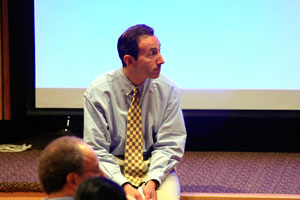 Zeldin fielded several questions from the audience and posed one of his own about the mechanisms of reactive oxygen species triggered by exposure to particulates. (Photo courtesy of Steve McCaw)

The researchers who examine air pollution understand that airborne particles can impact human health. One of these scientists, Jonathan M. Samet, M.D., presented an overview of the field as part of the NIEHS Distinguished Lecture Series. The seminar was titled "Airborne Particles and Health: What Do We Know in 2008?" and took place in Rodbell Auditorium on June 10. Dale Sandler, Ph.D., chief of the NIEHS Epidemiology Branch and Acting Clinical Director Darryl Zeldin, M.D., senior investigator in the NIEHS Laboratory of Respiratory Biology, co-hosted the event.

Samet is an expert in the areas of health affects of particulate air pollution and ozone, smoking and second-hand smoke, and the epidemiology of lung cancer. He carried out the majority of his work as professor and chairman of the Department of Epidemiology at Johns Hopkins Bloomberg School of Public Health, but he recently accepted the position (http://www.usc.edu/uscnews/stories/15343.html)

as director of the University of Southern California (USC) Institute for Global Health and chairman of the Department of Preventive Medicine at the Keck School of Medicine of USC.

Samet prefaced his talk with the comment, "air pollution kills," and went on to mention several instances when mortality rates increased dramatically as a result of large concentrations of airborne particles within a community. Probably the most studied incident, the London Fog of 1952, occurred because pollution from local factories, diesel buses utilized for public transportation and coal fires used to heat homes became trapped over the city. Thousands of people died during those four days in December and during the following year.

"Children and the elderly preferentially died during this time, but many people who did not fit into that category died too," Samet said. "From that point we see the rise of air pollution studies, air pollution epidemiology and regulation as a goal for how to prevent such disasters in the rest of the world."

Samet explained that particulate matter is measured in milligrams per cubic meter (mg/m3) of air, and that particles measuring 2.5 micrometers or less (PM2.5) in aerodynamic diameter are of interest because they are small enough to filter through the respiratory track and reach the alveoli or air spaces in the lungs. A typical room indoors may have 10 mg/m3 of PM2.5, while outside levels may be 25 mg/m3. In cities where the visibility is poor and the air looks gray, the air could contain a hundred times the normal level of particles.

Samet said that Americans spend almost 90 percent of their time indoors, so it seems plausible that the population would be protected from high concentrations of outdoor particulates. However, his research using a typical row house in Baltimore and black carbon as a marker of vehicle exhaust demonstrated that exposure to outdoor pollutants occurs indoors. He said, "We instrumented a row house [with monitoring equipment] during a time when there was a street closure and traffic was higher than usual. Both the indoor and outdoor levels of black carbon were virtually the same. The particles had penetrated the row home."

Since particle concentration is a major contributor to morbidity, the Environmental Protection Agency (EPA) sets standards and measures the complex mix of particles in the air. Samet and his team have taken this work one step further and have looked for additional factors that determine particle toxicity. His examination suggests other characteristics such as physical configuration, chemistry, surface structure and size are also involved.

In addition to toxicity studies, research by Samet's group and others has determined a link between air particulates and adverse cardiac function. He is currently working with colleagues at the University of Chicago to study heart failure and asthma models using bioassays.

Samet said that the air pollution research community now agrees that it needs to combine population research with a laboratory approach. "Much of our work has been based upon epidemiological approaches, but we're starting to do detailed monitoring and use these particles and bioassays to detect differential patterns of responses."