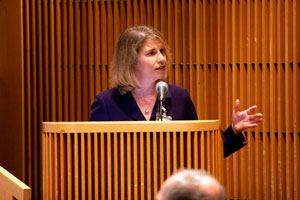 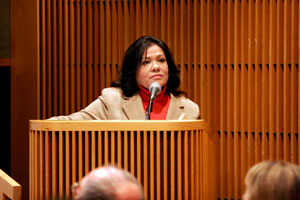 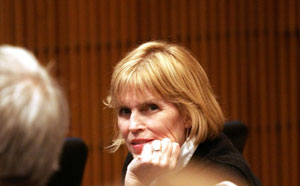 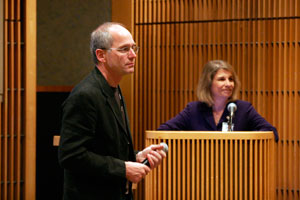 The Spirit Lecture Series, sponsored by the NIEHS Diversity Council, has honored women scientists who were not only leaders in their respective fields, but who were also able to balance science, community, volunteerism and mentoring. This year's speaker, Lisa Alvarez-Cohen, Ph.D., embodied the same indomitable spirit and delivered a lecture that combined how she succeeded in science with her work in the field of environmental engineering. Her talk, titled "Application of Omics-Based Tools and Microarrays to Optimize Bioremediation," took place on March 7 in Rodbell Auditorium. This seventh annual Spirit Lecture was co-sponsored by the Frontiers in Environmental Sciences Lecture Series and was part of several activities that celebrated Women's History Month.

is the Fred and Claire Sauer Professor and Chair of the Department of Civil and Environmental Engineering at the University of California at Berkeley. She said she was humbled and honored to be chosen as a Spirit Lecturer and acknowledged the role that NIEHS played in her career. "The majority of the research that I'll be talking about today was funded by NIEHS through the Superfund program to a center at UC-Berkeley," she said. "I'm incredibly grateful to the institute for supporting this work."

Alvarez-Cohen was anxious to jump into the science portion of the talk, but before she did, she offered advice on how to be successful in science. Among the essentials were being able to evolve as a scientist, prioritizing one's life and only doing work that one is passionate about. However, the most important skill was being able to get out of one's comfort zone. She recalled a turning point in her life when doing so changed her way of thinking and living.

When Alvarez-Cohen was in graduate school, she and a friend had planned to backpack across Europe one summer, but her friend backed out at the last minute. Alvarez-Cohen had never traveled anywhere at that point, but she decided to go anyway. "I spent the entire first day in London crying," she said. "I wanted to get back on the plane and come back to my comfort zone." Since she couldn't get another flight until the next morning, she decided she would venture out and attend a play that evening. When she did, she saw that she wasn't the only adventurer in town. "When I stood in line, I met all of these other people who were also backpacking that summer. It made me realize that I didn't have to always do things I was comfortable doing," she stated.

One area where Alvarez-Cohen is comfortable is tracking environmental contaminants. Her lab employs molecular tools to optimize bioremediation, which means using microorganisms to remove dangerous chemicals that leak from underground tanks. She said the reason why the nation's groundwater resources weren't contaminated with gasoline and other solvents was because of naturally occurring soil microorganisms that biodegrade them. "These versatile organisms live in complex communities that break down contaminants and pass them on to others that continue the degradation," she explained.

During bioremediation, Alvarez-Cohen works with Dehalococcoides, a bacterium that breathes chlorinated ethenes and other chlorinated materials. If perchloroethene (PCE), a highly toxic solvent and the predominant ingredient in dry cleaning solution, leaks into the soil, Dehalococcoides can break it down into ethene, a safe and environmentally-friendly compound. The reaction happens when the team biostimulates or injects an inexpensive organic such as lactate or whey into the ground. The fermenting organisms in the soil use the organic to make hydrogen, acetate and vitamin B12 - the products that Dehalococcoides need to grow. Alvarez-Cohen noted that if contaminated field sites don't have indigenous Dehalococcoides colonies present, the team could add enriched cultures of the bacteria to the soil in a process called bioaugmentation.

The lab's overall goal is to use biomarkers based on ribosomal genes to measure the numbers of Dehalococcoides at field sites and use quantitative functional genes to distinguish between different Dehalococcoides strains and their functions. Team members also use reverse transcription to quantify cell mRNA expression and microarrays to identify important growth conditions for the bacteria.