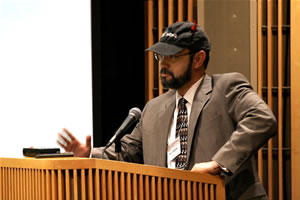 Before turning to the exciting new developments in systems biology, host David Balshaw joked about the poor showing of his division's ball team, the DERT Devils, at a recent match with Intramural Division players. (Photo courtesy of Steve McCaw) 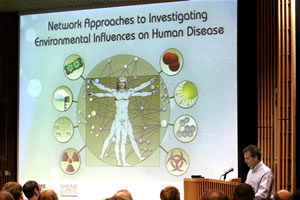 Schwartz described the way systems biology dovetails with the mission of NIEHS and issued participants several challenges that speakers referred to many times during the day's presentations. (Photo courtesy of Steve McCaw) 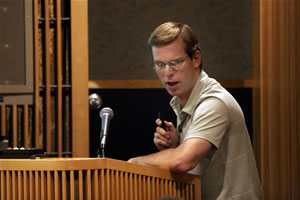 Biological Applications keynote speaker Trey Ideker is emblematic of the youth, talent and energy the field of systems biology has attracted. Ideker moved into systems biology from an engineering background and quickly established himself as a leading voice in the field of computational biology. (Photo courtesy of Steve McCaw) 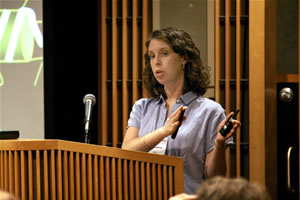 NIEHS scientist Karen Adelman focused on the systems aspect of her work with polymerase II stalling as she demonstrated some of the important applications of the approach to understanding stress response. (Photo courtesy of Steve McCaw) 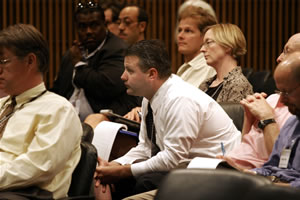 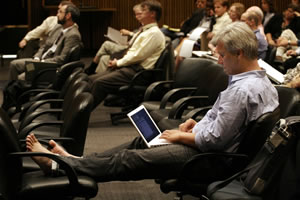 The full-day symposium was fast paced, and temperatures outside crept toward 100 - making it tempting for participants, such as Marc Vidal, foreground, to kick back and get more comfortable. (Photo courtesy of Steve McCaw)

NIEHS and the National Cancer Institute (NCI) co-sponsored a conference on August 16 in Rodbell Auditorium featuring talks by leading figures in the close-knit community of scientists working in basic, conceptual and translational research employing systems biology approaches. Titled "Network Approaches to Investigating Environmental Influences on Human Disease," the meeting was chaired by David Balshaw, Ph.D., program administrator in the Center for Risk and Integrated Sciences, a program in the Division of Extramural Research and Training (DERT).

In his welcoming address to symposium participants, several of whom were NIH grantees, David A. Schwartz, M.D., acknowledged the contributions by people at NIEHS, NCI, the National Heart, Lung and Blood Institute and the National Center for Research Resources. "This symposium will help us identify some approaches that we can take to understand how biological systems can be perturbed by environmental influences," he explained, "and how those perturbed biological systems relate to changes in human biology that lead to the development of disease."

Schwartz urged participants to keep that continuum in mind and help NIH identify "approaches that we can take in terms of programmatic development that will help us link environmental exposures to biological systems." He also stressed that the meeting would be an opportunity for the scientists to learn more about each other's work and identify future collaboration possibilities and new research directions.

Systems biology integrates many sciences, including biology, chemistry, physics, computation, engineering, mathematics and medicine, in an endeavor to understand the interaction and cross-regulation of biological pathways and characterize complete biological systems. The research involves extensive laboratory measurement, data mining and modeling in an effort to determine how to manipulate biological systems most effectively to treat and prevent disease.

Although the roots of system biology extend much farther back, the approach gained institutional and industrial support only in recent years. The Seattle-based Institute of Systems Biology was founded in 2000, and Harvard University established its first completely new department in over 20 years with the creation of its Department of Systems Biology in 2003. In the years since, system biology approaches have become a part of research by major biotech and drug development companies, and the approach is gaining a foothold in the toxicology testing and regulatory communities.

The Networks symposium was a day-long series of 11 presentations in four sessions:

Systems biology has made significant advances in the past ten to fifteen years, but it faces challenges in achieving the ultimate goal of mapping what is called the "human interactome" - the nearly two million molecular interactions in the human organism. In his 2006 argument in The Scientist for creation of a Human Interactome Mapping Project, at a projected cost of some $100 million, symposium participant Marc Vidal observed that only 1% of the human interactome had been mapped and perhaps only 10% for the model organisms, yeast, worm and the fly.