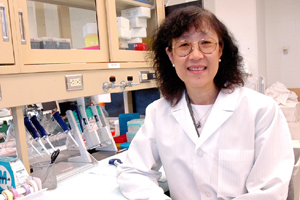 On August 28, NIEHS grantee Shuk Mei Ho, Ph.D., reported recent data related to the "epigenetic reprogramming" that can result from exposures to endocrine disrupting compounds (EDCs) during critical periods of life. Her talk, "Epigenetics for the Toxicologist and Epidemiologist," was a featured presentation during the meeting "Future Research on Endocrine Disruption: Translation of Basic and Animal Research to Understand Human Disease" held August 27-29 at the Marriott at the Civic Center in Durham, N.C.

A professor and chair in the Department of Environmental Health at the University of Cincinnati Medical School, Ho developed an emerging theme in the area of EDC research, the application of epigenetics to epidemiological studies. Specifically, Ho looked at the influence of early life EDC exposure on later human development.

"Epigenetics is very dynamic and actually changes over time during your entire life span," Ho told her audience. "There are some critical periods that are important, for example, the embryonic stage, early childhood, the time of puberty and also advanced age (relaxation of the epigenome)."

The epigenetic changes taking place in these developmental windows, she continued, are heritable modifications that potentially trigger trans-generational effects of exposures. At the same time, however, these bi-directional changes are reversible - and potential targets for interventions.

By exploring these potentially heritable traits, Ho addressed two of the important challenges of EDC research - the role of multiple exposures at various developmental stages and the trans-generational effects of exposure to EDCs. Ho also highlighted a point of convergence between EDC research and the new NIH Roadmap 1.5 Epigenetics Initiative now underway, positioning EDC investigations within an area of robust research activity at NIEHS.

"The epigenome serves as an interface between the dynamic environment and the inherited static genome," Ho explained, influencing what set of genes will be expressed and what genes will remain silent. For example, one of the target genes in her animal studies, which is responsible for encoding the enzyme phosphodiesterase 4 ( PDE4D4), is normally silenced in adult animals. In research performed with Gail Prins, Ph.D., at the University of Illinois at Chicago, Ho determined that the gene is over-expressed in animals treated with estrogen or the EDC Bisphenol A during fetal development.

When exposed to a hormonal challenge later in life, these animals were more likely to have increased levels of prostate-specific antigen. They were also more likely to develop prostate cancer than those not exposed during development. Estrogens and EDCs are thus capable of reprogramming the organism in early life by interfering with the normal DNA methylation pattern that gradually silences PDE4D4 during aging.

Translating the results of toxicology studies in animal models to the investigation of human diseases, Ho studied the effects of estrogens on the higher incidence of prostate cancers among African American men. Caucasian women, she noted, tend to have lower estrogen levels during pregnancy than do African American women. Ho hypothesized that the sons of African American women would have a greater likelihood of developing cancer decades later due to higher neonatal exposures to estrogen. This theory has expanded the view of a "born with" genetically determined risk of disease to a new paradigm that environmentally induced reprogramming of disease-related epigenomes continues to modify disease risk and development long after birth.

According to Ho, extrapolation of these preliminary findings to EDC exposure raises concerns about in utero exposure to ED contaminants in food and drinking water.